Get the live updates, most hilarious tweets and lot more on ICC World T20 2016 super 10 match between New Zealand and Bangladesh here.

New Zealand will face off Bangladesh in the 28th encounter of the ICC World T20 2016 at Eden Gardens in Kolkata. After an awful defeat against India at Bangalore, Bangladesh will be hoping to end the tournament on a positive note by defeating the strongest side in the group.

New Zealand have stunned everyone with their magnificent run in the tournament as they have defeated the likes of India, Australia and Pakistan to sculpt a spot in the semi-finals of the tournament. They will look for a clean sweep and further bolster their confidence and keep the momentum going. New Zealand vs Bangladesh at Kolkata: Live Streaming, ICC World T20 2016

As the tournament gets to the business end, one can expect the intensity to reach newer heights. It’s a great opportunity for Bangladesh as they have nothing to lose and can come out all guns blazing. New Zealand can experiment a bit and give opportunities to other players.

Both the teams have proven match winners in their side and one can expect Bangladesh to pull off an upset as they almost did it in their previous encounter against India. We bring you some of the best tweets from this crucial Super 10 encounter:

Another match won by the team that won the toss…this is turning out to be win-the-toss-win-the-match kinda #WT20 well played, #NZ.

Someone please tell #BAN the fine for slow over rate against #IND won’t be reversed because they saved 4 overs today. #BANvNZ #WT20

Grant Elliot was born as a Black Cap in SA. Those military mediums would make Gavin Larsen and Chris Harris sob in delight. #WT20

Reason Behind The Power Cut At Eden Gardens. 😉

Lights out at Eden Gardens. Has #PAK team left or can we ask Irfan to hold a couple of torches so that we can get on with the game?

#BAN Praying For Lights To Not Turn Back On Like:

How many times have we seen the flood lights go off at the Eden Gardens. Such a shame that this happens at international level !! #NZvsBan — Funnily Serious (@notionalview) March 26, 2016

Expect a tough chase for #BAN here. Have to break the back in the PowerPlay, and rely on someone batting close to 20 overs. #NZvBAN — Alt Cricket (@AltCricket) March 26, 2016

Bangladesh have all the resources to chase this total. Santner, Sodhi & co need to pull out all their tricks again.#NZvsBan #WT20 #AKLive — Anil Kumble (@anilkumble1074) March 26, 2016

Santner slow out of the blocks, but finished like Dhonut there… #wt20 #ban #nz — Innocent Bystander (@InnoBystander) March 26, 2016

Mustafizur Rahman always helped his mother in the kitchen because he is a good cutter #NZvsBan — Cricket Bakchod (@AllTimeBakchod) March 26, 2016

Another catch dropped by Al-Amin. He has dropped more catches than matches played by #BAN in #WT20 Super 10s — Nikhil (@CricCrazyNIKS) March 26, 2016

Bangladesh team would not even require a plane to fly back to their country. Good job ICC & BCCI #NZvsBan — Rahul Singh (@rahulksingh291) March 26, 2016

The only thought that crosses my mind while seeing today’s match #NZvsBan —the pitch for the #WT20 final ought to be a lot better. — Aakash Chopra (@cricketaakash) March 26, 2016

Black caps are just playing this one in the spirit of semi final. The game is theirs, they know it and the bechare bangaalis too. #NZvsBan — Kishmish Shortcake. (@beparwaah_) March 26, 2016 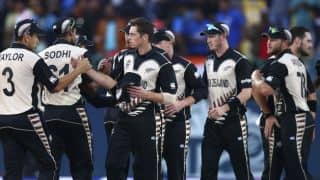 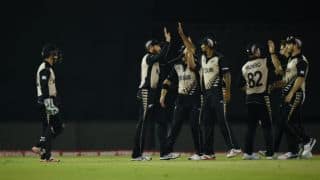