This will be the 18th match of the tournament and sixth match of the Super 10 stage. South Africa has been always considered a better T20 side as compared to England and their previous records also tells the same story.

As the ICC World T20 2016  progresses to the second round of the tournament, there will be many big clashes between top teams. One such contest will be witnessed between England and South Africa at Wankhede Stadium, Mumbai on March 18. This will be the 18th match of the tournament and sixth match of the Super 10 stage. South Africa has been always considered a better T20 side as compared to England and their previous records also tells the same story. On the eve this exciting match, Abhishek Kumar lists out four encounters between these two sides in previous World T20s and some pre-match statistical analysis. ICC World T20 2016, South Africa overview: Perennial favourites will look to banish the ‘chokers’ tag

1.  ICC World T20 2007, Super 8 match at Newlands, Cape Town: This was the first time when both these teams played against each other in a T20 match. England put South Africa to bat first and kept taking wickets at regular intervals. But Albie Morkel’s cameo of 20-ball 43 led South Africa to a respectable total of 154.

England showed a mediocre batting performance as they threw away their wickets on quick succession. Barring Matt Prior and Owais Shah no batsman could reach 20- run mark and at the end it was a comfortable win for South Africa with an overall impressive bowling performance.

2.  ICC World T20 2009, Super 8 match at Trent Bridge, Nottingham: Once again, it was a poor show from the England batsmen as they were bundled out for 111 runs. It was all started by Dale Steyn and eventually continued by Wayne Parnell with his amazing bowling spell. South Africa chased down the target quite easily, courtesy of Jacques Kallis’half-century.

3.  ICC World T20 2010, Super 8 match at Kensington Oval, Bridgetown: England finally won a World T20 game against these opponents in 2010. Batting first, England played decently with their star performer Kevin Pietersen scoring half-century that led his team to a defending total of 168. In reply to that, South African batsmen struggled from the start. Except JP Duminy, no other batsmen could even touch 20-run mark and eventually lost the match.

4.  ICC World T20 2014, Super 8 match at Chittagong: This was probably one of the best T20I matches played between England and South Africa. After posting a huge total of 196 on board with Hashim Amla and skipper AB de Villiers having scored half-centuries, South Africa were on front foot even before the English side took the crease. Although, England were off to a decent start, they later started to crumble and lose quick wickets. However, they counter attacked in the middle overs and in the end they were left with 22 runs to win the match. Tim Bresnan gave out his best batting against Steyn but fell short of three runs at the end.

Collage of these images 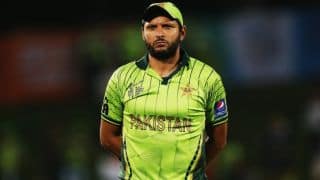