After an exciting start to the ICC World T20 2016, the tournament is now moving towards the business end - the knockout stages.

India will face off Australia in a decisive game which will decide the fate of both the teams on Sunday. After an exciting start to the ICC World T20 2016, the tournament is now moving towards the business end – the knockout stages. This is the last game of Group 2 and will be played at Punjab Cricket Association IS Bindra Stadium, Mohali, Chandigarh. Indian cricket team has been in good form in Twenty20 Internationals (T20Is) since the start of the year as they whitewashed Australia in their own backyard by 3-0 but there is a different story between both these teams when it comes to World T20.

Ahead of India-Australia encounter in this tournament, Abhishek Kumar looks at the previous four meets between these two sides in World T20.

1.  ICC World T20 2007, Semi Final at Kingsmead, Durban: Batting first, India started quite slowly but the moment Yuvraj Singh arrived at the crease, the whole scenario of the match turned. This match was all about Yuvraj’s glittering knock of 30-ball 70, which included five fours and five sixes. Later, Indian skipper MS Dhoni played a cameo and ensured a big total of 188 runs on the board.

Australia started off on a promising note as Matthew Hayden scored a scintillating 62. But the required run rate kept increasing as Sreesanth bowled exceptionally well in the middle. Australia kept losing wickets which didn’t help them achieve fruitful results and in the thrilling final over bowled by Joginder Sharma, India ensured a victory by 15 runs.

2.  ICC World T20 2010, Super 8 match at Kensington Oval, Bridgetown: In this clash, Indian bowlers bowled had a tough day except Harbhajan Singh, who was the most economical bowler for them. After India put Australia to bat first, they managed to get a good total of 184 on board with both the openers Shane Watson and David Warner scoring half-centuries. Indian batsmen did not enjoy a great day out in the middle except Rohit Sharma, no other batsmen could even touch the 15-runs mark and eventually lost the game by 49 runs.

3.  ICC World T20 2012, Super 10 match at R Premadasa Stadium, Colombo: Once again Indian batmen and bowlers floundered against Australia. Batting first, India only managed a modest score of 140 and then the show was all about Australian openers. Just like their previous encounter in World T20, Watson and Warner scored quick half-centuries and ended the match in their favour inside 15 overs.

4.  ICC World T20 2014, Super 10 match at Shere Bangla National Stadium, Mirpur: It’s like whenever Yuvraj scores, India win against Australia in a World T20. Fans were expecting a special knock from southpaw Yuvraj and he delivered in his own style. After Australia put India to bat first, Indian batsmen didn’t start well as they were four down for 66. And then came a big partnership between Yuvraj and Dhoni which helped India in posting a defendable total.

Australian batsmen were outplayed by Ravichandran Ashwin’s spin as a result of which they were all out for mere 86 runs and India won the match easily by 73 runs.

7 by MS Dhoni and Ravindra Jadeja 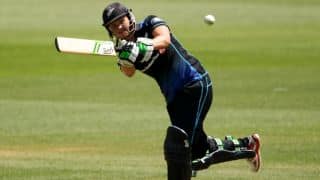 Look who is the new brand ambassador for Bhajji Sports!