India won the toss and chose to bat first

India started the tri-series on an average note as they suffered their second defeat in a row, in the third One-Day International (ODI) between India and England in Brisbane. India’s batting was a let down as they were bowled out for 153 runs in 39.3 overs. England chased down the score with utmost ease as they wrapped it up with the bonus point in 27.3 overs as Ian Bell and James Taylor remain unbeaten on 88 and 56 respectively.

Earlier, India were off to a slow start in the third ODI; they elected to bat first and lost their opener Shikhar Dhawan early to the returning James Anderson. With Rohit Sharma missing the game due to injury, Ajinkya Rahane was moved up to open while Ambati Rayudu came in at three. After building up the innings, Rahane fell to Steven Finn rather cheaply.

India lost both their openers early and they lost two more quick wickets as Virat Kohli and Suresh Raina fell to Finn and Moeen Ali for a mere score of 4 and 1 respectively. Finn was on a roll when he picked up his third wicket as India were tottering at 67 for 5 in the 19th over.

A steady 70 run partnership between captain MS Dhoni and Stuart Binny provided some resistance to the Indian innings but there was no respite as Finn came back in the batting powerplay to take two more wickets to limit India at 140 for 7 in the 37th over. This was Finn’s first fifer in ODI cricket. Finn ended with 5 for 33 while Anderson ended with the figures of 4 for 18.

While batting, England lost Ali quickly as Binny opened the bowling for India and took the first wicket; it was steady batting from the Englishman then on. England were well on course to victory as the partnership between Bell and Taylor ensured that they don’t lose the match.

For this game, India had two changes in the side as Ambati Rayudu and Stuart Binny came in for Rohit Sharma and R Ashwin. For England, James Anderson was back in the eleven in place of Chris Jordan.

Rohit, Ashwin make way for Rayudu and Binny in the playing XI #EngvsInd

Here’s the pitch which India will bat on first. Hot and humid in Brisbane #EngvInd #triseries #CWC15 pic.twitter.com/JvdYLWNxHc

50 partnership between Dhoni and Binny, and after that flurry of wickets, England could just do with another breakthrough. 118-5 from 31.3

Capt Morgan having an outstanding game

Stuart Binny 44 at Gabba, missed a fifty Roger Binny had made his only ODI fifty (57) vs Australia at Ahmedabad – 30 years ago! #IndvsEng — Mohandas Menon (@mohanstatsman) January 20, 2015

ALL OUT! Super catch on the boundary by Ali and England has dismissed India for 153! http://t.co/nRBAXnW7DE #ENGvIND pic.twitter.com/aZcFIK8y9S — FOX SPORTS Cricket (@FOXCricketLive) January 20, 2015

Half century for Ian Bell at exactly a run a ball and England are cruising at 1/90. http://t.co/nRBAXnW7DE #ENGvIND pic.twitter.com/N0xxgo0deb — FOX SPORTS Cricket (@FOXCricketLive) January 20, 2015

Cheers India…Lovely touch today getting the @ECB_cricket back into fine form….

.@finnysteve is awarded MoM in the 3rd Match of the Tri Series for his brilliant 5/33 #EngvInd pic.twitter.com/Roe1wHfbpX

Indns humbled at the Gabba.. if this is not wake-up call then V r reminiscing past only which is favourite past-time of Indn psyche anyway!! 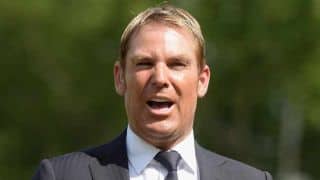 India vs England, 3rd ODI at Brisbane: Ambati Rayudu out for 23