During the post-match presentation Kohli said, We, as a team, want to dedicate this win to the flood victims in Kerala, said Kohli adding, This is our bit we can do as the Indian cricket team. A tough time there.

Torrential rains in Kerala for last 11 days have so far claimed 370 lives and displaced over seven lakh people to 5,645 camps.

Even though the rains have finally eased up in the state, thousands are still feared to be trapped, awaiting relief and rescue. The total loss Kerala has suffered in the floods is estimated to be over Rs 20,000 crore.

After setting an improbable target of 521 runs for England to chase, India bowled out England for 317 in the second innings after they had shot down England for 161 in the first innings.

While Hardik Pandya and Jasprit Bumrah claimed five-for in the first and the second innings, respectively, Virat Kohli was adjudged the Man-of-the-match for his 97 and 103 in the match and the 29-year-old dedicated the award to his wife, Bollywood actress Anushka Sharma, who has been at the receiving end of social media trolls recently.

I’d like to dedicate this to my wife who is here and keeps motivating me. She’s copped a lot in the past but she deserves the credit for this one, added Kohli during the post-match presentation. 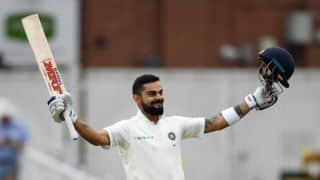