India notched up a 35-run win in the fifth and final ODI Sunday to secure a historic 4-1 win in the five-match series.

India notched up a 35-run win in the fifth and final ODI Sunday to secure a historic 4-1 win in the five-match series, their biggest triumph on New Zealand soil across formats since they stated touring the country in 1967. (ALSO READ: Ambati Rayudu, Hardik Pandya and MS Dhoni headline victory)

After the trophy was presented to the team, batsman Kedar Jadhav shouted “How’s the Josh” just like the character played by Vicky Kaushal in the film. (ALSO READ: Statistical review: MS Dhoni surpasses Azhar, India go past Pakistan)

In response, the other members of team chanted “High sir”.

The BCCI later shared the video of the celebration on its Twitter handle with the caption: “Looks like the ‘JOSH’ in the squad is ‘HIGH SIR’.

Vicky also posted the BCCI video on his timeline.

“Our Indian cricket team always gets the JOSH of the nation super high and makes us all proud! Congratulations on the amazing win! INDIAAA INDIA!!!”, he tweeted. 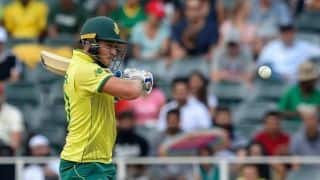