The final will be played at Bangalore on Sunday and one can expect the encounter to be a high-voltage one.

The ninth edition of the Indian Premier League (IPL) heads towards the business end of the tournament and the battle will be between Gujarat Lions, Royal Challengers Bangalore, Sunrisers Hyderabad and Kolkata Knight Riders to clinch the title. The final will be played at Bangalore on Sunday and one can expect the encounter to be a high-voltage one. READ MORE: When a schoolteacher told David Warner, “When you grow up, you will be good at nothing”

GL finished the league table as the table-toppers and will now lock horns with RCB who are placed second. Both the table-toppers will take one each other in Qualifier 1 and the winner will advance in the finals whereas the losing team will get another reprieve to battle it out in the Qualifier 2. Sunrisers Hyderabad and Kolkata Knight Riders will cross swords with each other in the Eliminator which will be a knock-out game. The winner of this game will progress to Qualifier 2 and the losing team will be eliminated. READ MORE: Chris Gayle opens up on his ‘big bat’, women, sex, cooking and changing nappies

Qualifier 2 will again be a do-or-die game as the winner will chisel his path into the final and the team on the losing side will be end up at third place.Expect a thrilling encounter as ll teams have drilled hard to make it to the playoffs and can’t afford to step a foot wrong. Take a look at the playoffs schedule here: 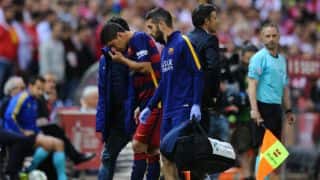