Chappell donned the coach’s hat for India between 2005 and 2007 but had a tough time as he developed a difficult relationship with big names like Sourav Ganguly, Sachin Tendulkar and Rahul Dravid.

Former Indian skipper Anil Kumble has been recently appointed as Team India’s head coach by the BCCI. This move has attracted enormous attention and many greats and pundits of the game voiced their opinion on this. Former Indian coach and Australian cricketer Greg Chappell on this occasion, has hailed the appointment of Anil Kumble and termed the move as an ‘inspired choice’. Also Read: Sourav Ganguly wasn’t there when I was interviewed, says Ravi Shastri

Chappell donned the coach’s hat for India between 2005 and 2007 but had a tough time as he developed a difficult relationship with big names like Sourav Ganguly, Sachin Tendulkar and Rahul Dravid. In fact, it was Ganguly who recommended Chappell for the elite job of India’s head coach.

Ganguly was quoted in a report from cricket.com.au saying, “I once had an opportunity to select the coach. I thought I messed it up in 2005. I’m given that opportunity again. Hopefully we will do it correctly this time. Luckily, I have got support in Sachin, VVS, the BCCI secretary and president. Together we will pick the right person.” Also Read: Anil Kumble called up Ravi Shastri after his appointment of head coach

Chappell wrote in The Hindu newspaper, “If they had been blessed to have been surrounded by other selfless individuals whose only aim was to serve the team, the Indian teams in which they played would have been impossible to beat. Kumble was never one to blow his own trumpet, but no one ever needed to be told that he was giving the team everything that he had. Whether with the bat or the ball or in the field, Kumble competed with a tenacity that few Indian players have surpassed.”

Chappell is now rendering his services as Cricket Australia’s National Talent Manager. Chappell supported Kumble’s selection highly and spoke highly about him. He wrote, “Too often in the past, Indian teams have tried to take short-cuts rather than work hard so any success has been fleeting. It was something that I was appointed to change, but it needed key players, not least of all the captain (Ganguly), to buy-in and lead by example.” Also Read: Ravi Shastri expresses disappointment on India head coach snub

“Sadly, this didn’t happen until Dravid was appointed and the next 12 months brought some consistent success because of the change at the top”, he added. 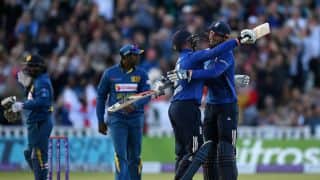