Indian team played with immense confidence and got things in order to dismantle West Indies for their lowest total against them.

India beat West Indies in the third Test of the four-match series at St. Lucia by 237 runs and clinch the series with a 2-0 lead. Indian team played well and got the things in order to dismantle West Indies for their lowest total against them. Chances were bleak for India to win the Test after Day 3 was washed out due to rain but India grabbed the slight opportunity with both the hands and came out in flying colours. Also Read: Swing it like Bhuvneshwar: Twitter reacts to pacer’s fifer on Test return

West Indies were bowled out for a mere score of 108 as their batting floundered against India attack. Every Indian bowler contributed substantially and it was a collective team effort. Mohammed Shami was the pick of the bowler with three scalps to his name. Ishant Sharma, Ravindra Jadeja contributed with two wickets each while Ravichandran Ashwin, Bhuvneshwar Kumar chipped in with one each.

This is a historic win for India as the Virat Kohli-led side is one a role. Take a look how Twitter reacted to this win here:

Congratulations team india for an amazing win!! Well done @BhuviOfficial @MdShami11 @imVkohli. One more to go for that No.1 spot #WIvIND

Congrats Team India on a emphatic win Excellent effort from the bowling unit to bowl out WI in just 48 oversKeep it up #IndvsWI — VVS Laxman (@VVSLaxman281) August 14, 2016

A true gift from Indian team ahead of Independence Day as they beat West Indies by 237 runs. — Akash Baidya (@AksBaidya) August 13, 2016

For The 1st Time India Have Won 2 Tests In A Series In The Caribbean. Historic Victory.Thanks To Me. 😉#IndvsWI #WIvInd West Indies by 237 — Sir Ravindra Jadeja (@SirJadejaaaa) August 13, 2016 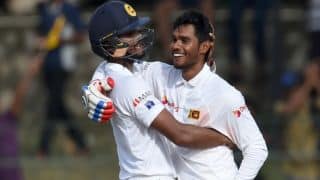 PHOTO: This is how Virat Kohli rolled after India’s series win over West Indies