One of the most consistent sides in the Indian Premier League (IPL) Chennai Super Kings (CSK)take on the Royal Challengers Bangalore (RCB) in the 37th match of the IPL at MA Chidambaram stadium on Monday.

One of the most consistent sides in the Indian Premier League (IPL) Chennai Super Kings (CSK)take on the Royal Challengers Bangalore (RCB) in the 37th match of the IPL at MA Chidambaram stadium on Monday. Both the teams had diverging results in their previous encounters. RCB fought fire with fire and registered a win against kolkata Knight Riders (KKR). Whereas, CSK endured a massive defeat when they failed to chase down the set target of 193 against Sunrisers Hyderabad.

RCB is the most enhanced team in the IPL. They have gelled well as a team. The inclusion of Mitchell Starc has changed the complexity of the team. In their previous encounter against KKR, the game was reduced to ten over a side due to incessant rain. KKR set a target of 112 in ten overs for the giants to chase down. RCB got off to a brisk start as their openers fired with bat. The game took enough twist and turns and finally it was Mandeep Singh’s valiant performance with the bat, which carried his team over the line. RCB have maintained their good run and are high on confidence , they will look forward to contain CSK in their own den. With four victories from nine matches including a draw RCB are well placed at the third position in the points table.

For CSK, they just seem to have lost their way after two straight defeats. They arguably have the most balanced team in the IPL. In their previous encounter against SRH, they failed to chase a target of 193. Their domestic batsman has to step up and make a significant contribution as they have failed in the tournament so far. Bowling looked decent until the previous match, where they were taken for cleaners by David Warner. Although, Chennai are well paced at second position, they have to pull their socks up and come out hard against RCB.

Expect 6s and 4s raining at Chidambaram stadium, when these two giants collide. With the match being played at Chennai, CSK emerge favourites. We present you with the pick of the tweets.

This is 501st #IPL match. Raina has played 125 matches out of them. That’s like Raina plays once every four IPL matches! #WowIPLstats

Only Six times IPL Match have begun with maiden over wicket and This is 2nd time for CSK.. #CSKvsRCB — Broken Cricket (@BrokenCricket) May 4, 2015

What a contest this is going to be #CSKvsRCB #IPL pic.twitter.com/rAWIgsQOio — IndianPremierLeague (@IPL) May 4, 2015

McCullum is taking revenge on Starc for dismissing his partner! 11 from Starc’s second over including back to back fours. #CSKvRCB — HoldingWilleyCricket (@holdingwilley) May 4, 2015

The players and umpires are out! It is going to be an intense game in this sweltering heat! Lets go! #CSK #IdhuNammaSeason #whistlepodu — Chennai Super Kings (@ChennaiIPL) May 4, 2015 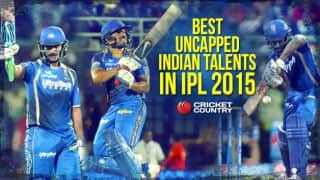 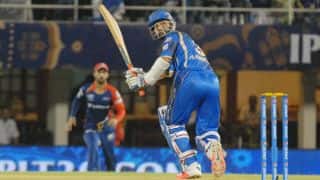