Just about a week into Indian Premier League (IPL) 2015, each team has played at least once already. In this short span, we have seen top-notch performances from the likes of Brendon McCullum and Chris Gayle, but five unheralded cricketers have caught the attention even more.

Just about a week into Indian Premier League (IPL) 2015, each team has played at least once already. In this short span, we have seen top-notch performances from the likes of Brendon McCullum and Chris Gayle, but five unheralded cricketers have caught the attention even more, feels Shiamak Unwalla.

The former Indian under-19 cricketer had put in some good performances during the ICC Under-19 World Cup 2014. He had taken a five-wicket haul and scored a couple of half-centuries as well. Two matches for Rajasthan Royals (RR) in this season, the Baroda all-rounder has shown that he is ready for the big league. In his first match against Kings XI Punjab (KXIP), Hooda scored 30 off 15 balls with three sixes and a boundary.

That was just the warm-up. In RR’s next match against Delhi Daredevils (DD), Hooda first bowled four tidy overs that cost merely 20, and then rescued RR from the brink with an innings of 54 off 25 balls with three fours and four sixes. Hooda rarely slogged, and played some delightful shots in the innings. He is certainly one for the future.

Anureet is not a young man. At 27, he is an experienced campaigner for Railways with a prolific First-Class record. He isn’t new to IPL either, having played a few games for Kolkata Knight Riders (KKR) in 2009. However, he was a largely ignored entity in IPL till KXIP’s first match of IPL 2015. He bowled four overs for just 23 and took three wickets against RR. He took two wickets against Mumbai Indians (MI) as well, though his figures took a bit of a pounding at the hands of Harbhajan Singh toward the end of the game.

All eyes were on KKR’s much talked-about mystery spinner KC Cariappa when he finally got to play their second game, against Royal Challengers Bangalore (RCB). Cariappa was greeted in inauspicious fashion, with Chris Gayle launching him over long on for six and following it up with a boundary later in the over. In his next over AB de Villiers hit him for two fours and a six; but then Cariappa showed his mental strength, sending down one even slower that spun the other way and beat de Villiers’ attempted loft to have him stumped. It is said that the mark of a good spinner is how he comes back after being hit, and Cariappa showed that he was good enough to back himself and outfox probably the best batsman in the world at the moment.

Another former Indian under-19 player and teammate of Hooda, Shreyas Iyer had been making waves in junior cricket for Mumbai. He finally played in the Ranji Trophy 2014-15 season, and made an immediate impact with 809 runs in his maiden season with two tons and six half-centuries. He currently averages 50.56 in First-Class cricket, and enjoys a tremendous strike rate of 75.89. His List A record is impressive as well, with an average of 54.60 and strike rate of 92.85 in six games.

Shreyas was sent in to open batting for DD in their second game, and scored a composed 40 off 30 balls with three fours and as many sixes. With DD having lost each of their first two games, Shreyas will likely have a larger role to play in their upcoming games.

Suchith played MI’s second game — against KXIP — ahead of Pragyan Ojha primarily as a left-arm spinner. He did reasonably well with the ball, getting the huge wicket of Glenn Maxwell, though he took a bit of a pounding as well. With the bat though, he — along with Harbhajan Singh — nearly took MI home. He remained unbeaten on 34 off 21 balls with four fours and two sixes. Perhaps the highlight of his knock was a pull shot off Mitchell Johnson that caused the Australian pacer to look at him with wonder. 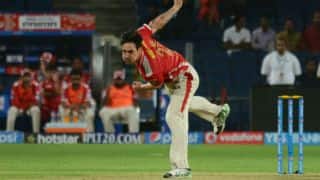 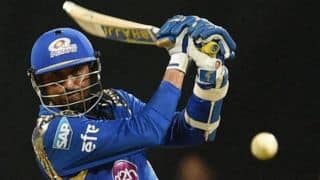