Suraj Choudhari gives five reasons why KXIP have failed miserably in this IPL so far.

Kings XI Punjab (KXIP) were in an enviable position in the previous edition of the Indian Premier League (IPL), but have had a dreadful run in this edition so far. They have languished to the bottom of the points table, managing just two wins from their seven outings. Although they have enough ammunition in their batting line-up and some talented Indian bowlers in the form of Sandeep Sharma, Axar Patel and Anureet Singh, they’ve nevertheless struggled as a unit.

Suraj Choudhari gives six reasons why KXIP have failed miserably in this IPL so far.

Glenn Maxwell and David Miller were the demolishers-in-chief for Kings XI Punjab (KXIP) last year. The side heavily banked on these two batters and they did bail them out on most of the occasions. Maxwell, who was one of Australia’s World Cup stars, has looked completely out of sorts in this IPL. He has scored 62 runs from five games. Miller has been inconsistent and hasn’t been able to replicate his magic. The failures of these two have hurt KXIP massively.

Fielding lapses hampered KXIP’s progress. The likes of Miller, Maxwell, George Bailey and Akshar Patel render fielding a joy to behold. So it was a surprise to see KXIP let up on that front. ‘Catches win matches’ is a cliché that holds very true and KXIP have dropped aplenty. In the game against Chennai Super Kings (CSK), Mitchell Johnson dropped two catches and that too of Brendon McCullum and Suresh Raina. Those two drops cost them the game. Even Maxwell has dropped sitters in the earlier games and barring these chances, KXIP’s ground fielding has been rather slack.

3. Failure at the top

Murali Vijay and Virender Sehwag are two big names and come with immense reputation. However, they have failed to gel together. Last season, Sehwag and Manan Vohra got the side off to good starts and this has been a major area of concern. They have hardly got desirable starts and the middle order has had to bear extra pressure. They failed to utilise Shaun Marsh as an opening option.

Early wickets are like gold-dust irrespective of formats. In the Twenty20 (T20) format, the scorecard races as if it’s a book cricket match and chances for mistakes are less. The side’s strike bowler, Johnson bowled erratically. He was too expensive and leaked runs and didn’t look like the leader of the attack. Other than that, Sandeep Sharma was decent but didn’t get enough support from the other end. Except Sandeep, all the bowlers were expensive and leaked runs. Even the spinners floundered. Karnveer Singh squandered his golden opportunity to make an impression in the IPL, when he went for 86 runs in two matches and failed to clinch a single wicket. Axar Patel, one of their stars last season, seems to have lost the magic. He has been decent but hasn’t looked as threatening as before.

5. All-rounder’s not stepping up

Though wicketkeeper Wriddhiman Saha has done his bit, the other all-rounder options haven’t done too well for KXIP. If we look at the sides that have done well, all-rounders have played a major role. From Dwayne Bravo of CSK to Andre Russell of Kolkata Knight Riders (KKR), they have performed exceptionally. However Axar hasn’t been able to contribute much with the bat, even the likes of Rishi Dhawan and Maxwell have looked off-colours.

With the exception of opener Vijay, KXIP haven’t made good buys in 2015 auction. The side wears a same look and there is too much predictability and no surprise element, which has made opponents plan better. They could have invested on new talent to widen their pool for selections. 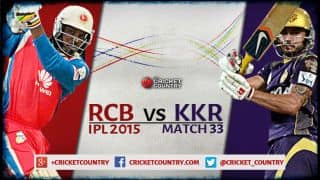