Sunrisers Hyderabad (SRH) take on Mumbai Indians (MI) in the 56th game of the Indian Premier League (IPL) at Rajiv Gandhi International Stadium, Hyderabad on Sunday. It’s like a knock-out contest with both teams needing a win to make it to the play-offs

Skipper David Warner and Shikhar Dhawan have done a great job at the top of the order. Moises Henriques’s inclusion has changed the team’s fortunes and he continues to impress. Eoin Morgan, KL Rahul have made decent contributions to the team and will look in continuing that. The middle-order looked wobbly in the start of the tournament but it has changed now.

Bhuvneshwar Kumar continues to spearhead the bowling attack but couldn’t pull it off in the last game against Royal Challengers Bangalore (RCB). Dale Steyn and Trent Boult have been in and out of the side and their performances in these crucial games matter a lot. Karn Sharma has done a fine job whereas Henriques comes as a handy all-rounder.

MI are coming in this game with a lot of confidence. They overpowered the defending champions and have clicked as a unit in the latter stages of the tournament. Lendl Simmons and Parthiv Patel have stabilised the innings at the top of the order. They have a strong middle-order with the likes of Rohit Sharma, Kieron Pollard, Ambati Rayudu and new sensation Hardik Pandya.

Despite of losing his lethal sting, Lasith Malinga has continued to perform for MI when it matters. Harbhajan Singh and Jagdeesha Suchith are reliable spinners in this team. Pollard is known for his variations and can shoulder the responsibility of death bowling.

It is tough to predict the winner as both the teams are evenly matched. It is high time for both the teams to pull up their socks and go for the kill from the very first ball.

Mumbai winning this in a canter as one expected. Damatic transformation in team’s fortune’s after poor start. Watch out other teams!

On another note…#SRH has given a lot of opportunities to youngsters too but just that they haven’t capitalised. Rahul, Ojha, Reddy, Vihari

Slightly surprised by the lack of aggressive intent from #SRH…seems like they’ve thrown in the towel after getting dismissed for 113. #IPL — Aakash Chopra (@cricketaakash) May 17, 2015

Two years in a row, #MI have come back from the brink. In a quiet, understated way, Lendl Simmons has been a key player. #PepsiIPL — Harsha Bhogle (@bhogleharsha) May 17, 2015

MI openers look very cool, and why not, after all they are not flamboyant like Warner or Dhawan. #SRHvsMI — Bhishmadeb Dasgupta (@BhishmadebD) May 17, 2015

Eoin Morgan needed to do much more too for #SRH. Will be in the market, no doubt. #PepsiIPL — Harsha Bhogle (@bhogleharsha) May 17, 2015

The MI openers are out. @DaleSteyn62 to bowl first. We need the #SteynGun to fire now #SRH #OrangeArmy #SRHvsMI — SunRisers Hyderabad (@SunRisers) May 17, 2015

#SRH could’ve finished 2nd: would have made it a great #PepsiIPL for them. Instead, as seems now, could finish 6th which makes it a bad IPL — Harsha Bhogle (@bhogleharsha) May 17, 2015

An entire season of over-reliance on Warner, Dhawan and Henriques has been exposed in this innings. #IPL #SRHvMI #SRH #MI — Freddie Wilde (@fwildecricket) May 17, 2015

” Any team without Kevin Pietersen in it, I don’t think is as strong. I think his statistics speak for themselves ” ~ Michael Clarke — Broken Cricket (@BrokenCricket) May 17, 2015

Unless something dramatic happens from here #MumbaiIndians are coming home to Mumbai #PepsiIPL — Harsha Bhogle (@bhogleharsha) May 17, 2015

How many wickets does SRH have, can’t believe they’re still losing them. #SRHvsMI — Gaurav Sethi (@BoredCricket) May 17, 2015

@mipaltan are all over #SRH right now , for me key factor for them has been way @harbhajan_singh has bowled all this season (1/2) — Mohammad Kaif (@KaifSays) May 17, 2015

In a very close `line’ no-ball decision, as we saw with Pollard now, should the benefit of doubt go to batsman or bowler, what’s your take? — Cricketwallah (@cricketwallah) May 17, 2015

When it so tight on No-Ball calls.. Danny and @bowlologist got it right… Benefit must go to the bowlers.. #IPL #SRHvMI — Dean Jones (@ProfDeano) May 17, 2015

Ashish Reddy goes for that one, and gets caught #SRH #OrangeArmy #SRHvsMI — SunRisers Hyderabad (@SunRisers) May 17, 2015

There are situations where teams have recovered from here, but SRH lost too many wickets up front. Still,anything can happen in IPL.#SRHvsMI — WeAreHyderabad / SRH (@WeAreHyderabad) May 17, 2015

Statically #SRH are the best team in #IPL history defending scores of less than 150; they’re going to have to do it again today. #SRHvMI #MI — Freddie Wilde (@fwildecricket) May 17, 2015

If Danny Morrison was born in India, he would have taken playing singing as his second career option #SRHvsMI — RuBluez (@RuBluez) May 17, 2015

The best decision #MI made this season was replace Corey Anderson with Mitchell McClenaghan. Their bowling is a threat. #IPL #SRHvMI #SRH — Freddie Wilde (@fwildecricket) May 17, 2015

Ravi Shastri calling this a semi- final. Next he will call #MI as the ‘Indian Team’ #SRHvMI #IPL — HoldingWilleyCricket (@holdingwilley) May 17, 2015

This is Could turn the match Completely towards Mumbai Indians way as SRH depends So much on David Warner.. #SRHvsMI — Broken Cricket (@BrokenCricket) May 17, 2015

That patented #MI comeback in their final #IPL group game is on. Guess Hales will get a chance to play then. #srhvsmi — Pitch Invasion (@pitchinv) May 17, 2015

The yorker specialists @BhuviOfficial and Malinga will make all the difference tonight. #SRH #OrangeArmy #SRHvsMI pic.twitter.com/H1h3xCzN0g — SunRisers Hyderabad (@SunRisers) May 17, 2015 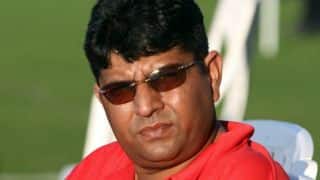 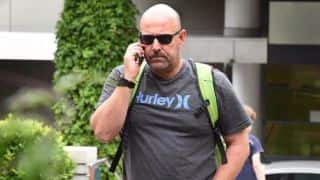