Ashish Nehra has been instrumental in the recent times and his loss is huge for the SRH side.

Sunrisers Hyderabad strike left-arm pacer Ashish Nehra has been ruled out of the tournament after suffering a mistimed injury during their previous encounter against Kings XI Punjab. He sustained a hamstring tendon injury which has also raised few questions on his participation in the international cricket in he future. The press release issued by the franchise quoted, “Sunrisers Hyderabad spearhead, Ashish Nehra has sustained a significant hamstring tendon injury during the match against Kings XI Punjab on May 15, 2016. Ashish Nehra is now in consultation with a specialist orthopaedic surgeon for the most appropriate course of treatment to ensure a successful return to competitive cricket. Unfortunately he will play no further part in the ninth edition of the Indian Premier League for Sunrisers Hyderabad.” READ MORE: Break up? Who said? Virat Kohli, Anushka Sharma’s latest picture suggests they are together

It’s a huge blow for the RH side as they banked heavily on the experience of Nehra to lead he ace attack. He has been instrumental in the recent times and his loss is huge for the SRH side. The injury is expected to take months to heal and Nehra services will be dearly missed by the SRH side in the business end of the tournament.

Nehra has featured in 8 IPL games for the Sunrisers this season and chipped with 9 wickets at a good economy rate of 7.65. His best bowling figures were three for 15. 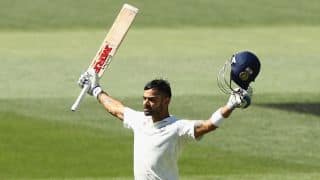