Kolkata Knight Riders edged past Sunrisers Hyderabad in the 55th game of the Indian Premier League at Kolkata on Sunday to chisel their path in the playoffs.

Kolkata Knight Riders edged past Sunrisers Hyderabad in the 55th game of the Indian Premier League at Kolkata on Sunday to chisel their path in the playoffs. KKR now have 16 points in their kitty and will be the team to watch out for in the playoffs. It was a do-or-die game for them and Yusuf Pathan along with Manish Pandey ensured they didn’t create an upset as both of them fired some big runs. It was a team effort by KKR as their bowlers stood up and weaved magic at the spinning track of Eden Gardens.

SRH won the toss and opted to field first on a wicket which had massive assistance for the spinners. KKR got off to a flying start as both Robin Uthappa and Gautam Gambhir made batting look extremely easy and pleasing to the eye. Moments later, Uthappa played a needless stroke and threw his wicket away. the lost couple of more wickets in quick succession as Colin Munro and Gambhir were dismissed in quick successions.

KKR were precariously placed 57 for 3 inside 8 overs when Pathan walked out to bat. He along with Pandey not only rebuilt the KKR innings but scored runs at a brisk pace and put the pressure back on the opposition. Pathan kept hitting the odd balls for boundaries and kept rotating the strike whereas Pandey played to his instincts. KKR looked set for a big score of over 180 as the foundation was laid by these two but it wasn’t to be as they stumbled in the end and posted just 171 for the loss of six wickets.

SRH looked good in the run-chase as Shikhar Dhawan and David Warner looked extremely comfortable out in the middle. Warner was taking on the KKR bowlers but Sunil Narine got the better of him with a beautiful delivery. Dhawan was unaffected and kept the scoreboard ticking from the other end but was lacking a partner. He got out after scoring a fifty and SRH now had a job in hand with plethora of runs to be scored and a set batsman out. Yuvraj Singh smashed couple of good shots and threatened to take the game away from KKR but Shakib Al Hasan got rid of him at a time when he looked dangerous.

Kuldeep Yadav was instrumental with the ball as he was picked ahead of Piyush Chawla and chipped in with two wickets. Narine accounted for four and broke the SRH spine with his guile. It was some brilliant bowling by KKR as they did well to successfully defend a low score of 171. SRH endured a 22 runs defeat but still make it to the playoffs. 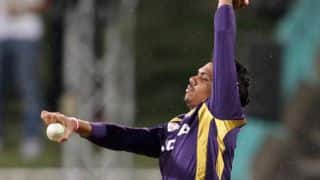