Catch the live action of the fourth game of IPL 2016 between Royal Challengers Bangalore and Sunrisers Hyderabad here.

The fourth match of the Indian Premier League (IPL) will be played between Royal Challengers Bangalore (RCB) and Sunrisers Hyderabad (SRH) at Bengaluru on Tuesday. This is the first game of both the teams and they will look to get off to a positive start and win the game.

Royal Challengers Bangalore have a formidable line up with some big names in their line up in the form of Chris Gayle, AB de Villiers, Shane Watson and their man in form Virat Kohli. They have some good domestic bowlers too who can make an impact and hungry for success. With the match being played at Bangalore, RCB will definitely have an upper hand.

Sunrisers Hyderabad on the other hand, have players like David Warner, Kane Williamson, Shikhar Dhawan, Ashish Nehra, Eoin Morgan and Mustafizur Rahman. The match will start at 8.00 pm Indian Standard Time (IST) and will be telecast live on Sony Six, Set Max and can be watch by live streaming through Hotstar. 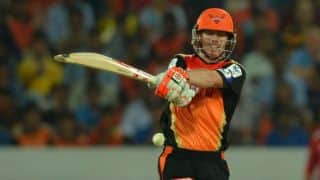