Here is a possible XI of the overseas cricketers, who were ruled out of the cash-rich league this edition due to injuries.

Overseas cricketers play a huge role in Indian Premier League (IPL). You can play only four in one side and those four men form a vital part of the composition. This edition of IPL has seen as many as 12 key overseas cricketers suffering from major injuries that have resulted in them being ruled out of their respective sides. New franchise Rising Pune Supergiants (RPS) has suffered the most. Suvajit Mustafi jots down a possible XI of the overseas cricketers, who were ruled out of the cash-rich league due to injuries.

1. Faf du Plessis (Rising Pune Supergiants): The South African T20 skipper was key to RPS chances at the top and already had scored two fifties. A fractured finger ended his campaign. In this side, Faf expectedly opens the batting.

2. Lendl Simmons (Mumbai Indians) — Wicketkeeper: He was crucial to MI’s chances at the top order. His scintillating form at Wankhede Stadium helped the side in 2015 edition. Just before the tournament started, his hurricane knock helped West Indies qualify for the ICC World T20 final. His Man-of-the-Match performance against India at Wankhede saw them triumph in the semis before they went onto win the title. A lower back injury hampered his IPL this year. He makes this side as the other opener and of course, he has to don the additional responsibility of wicketkeeping. Simmons has kept wickets in the past.

3. Shaun Marsh (Kings XI Punjab): The Australian batsman has been key to KXIP’s batting fortunes right since the tournament’s inception. Shaun was having a decent run for the struggling KXIP before a back injury ruled him out. He bats at No. 3.

4. Steve Smith (Rising Pune Supergiants) — Captain: Smith’s injury was a huge blow for the struggling Pune side. Before injuring his wrist, he had smashed 270 runs at 45 and at a strike rate of over 150. RPS will continue to miss him. The Australian skipper has been named captain of of this side.

5. Kevin Pietersen (Rising Pune Supergiants): KP injured his right calf during the match against Royal Challengers Bangalore (RCB). It all started for Pune with KP’s injury. The struggling franchise has missed the Englishman. Though No. 5 may be a bit too low for KP, considering the balance of this side, that is where he bats.

6. Mitchell Marsh (Rising Pune Supergiants): A side strain ruled him out of the IPL and not surprisingly, we see another RPS cricketer in the list. Pune could not make much use of Mitchell’s all-round skills this season. He bats at No. 6 and will also chip in with a few overs for this side.

7. John Hastings (Kolkata Knight Riders): The Australian was an important signing for KKR this season. He started off well but a mis-timed ankle injury saw his IPL campaign come to a premature end. Hastings will be one of the key bowlers for this side and he can wield the willow lower down the order.

8. Mitchell Starc (Royal Challengers Bangalore): RCB’s bowling has received a lot of flak this season and they faced a major blow even before the tournament started when Starc was declared unfit and ruled out of the tournament. The lanky Australian left-arm seamer is the strike bowler for this side.

9. Adam Milne (Royal Challengers Bangalore): A hamstring injury ended Milne’s campaign as he became the latest overseas casualty in the IPL. The Kiwi can clock serious pace and we saw his effectiveness in the World T20 2016.

10. Samuel Badree (Royal Challengers Bangalore): He is the No. 1 ranked T20I bowler and if Starc’s injury was a blow for RCB, Badree being ruled out added salt to their wounds. The best bowler from the World T20 could not play a single game for his new IPL side because of the shoulder injury that he sustained in the World T20 final.

11. Lasith Malinga (Mumbai Indians): Over the years, Sri Lanka’s Malinga has been the key to MI’s success. The best bowler in IPL’s history sustained a knee injury early in the year and that ruled him out of the World T20 and major part of the Asia Cup. Malinga is irreplaceable but Mitchell McClenaghan has done well in his absence.

Joel Paris (Delhi Daredevils): It would have been the Australian left-arm pacer’s first IPL but a shin injury came in the way. He is the 12th man of this injured XI side. 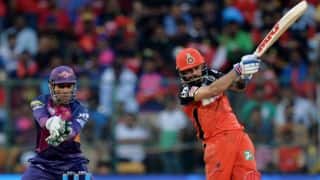