AB de Villiers and Virat Kohli got the ball rolling from the outset at Bengaluru against their Indian Premier League encounter against Sunrisers Hyderabad.

Royal Challengers Bangalore batsmen  AB de Villiers and Virat Kohli got the ball rolling from the outset at Bengaluru against their Indian Premier League encounter against Sunrisers Hyderabad. Both the batsmen scored a brisk pace especially De Villiers who placed his innings with perfection. Kohli was a bit slow in terms of strike rate but did exceptionally well to make up for that. Their partnership was like a highlight package where boundaries were raining at Bengaluru.

Both Kohli and De Villiers brought up their half-centuries and further steered their side to a dominating position. Royal Challengers Bangalore got off to a rocky start as they lost Chris Gayle early on their innings. RCB are now well placed at 156 for 1 after 15 overs. They can now get a score of 200 as both the batsmen are well and will pile more runs with the bat. Check out some best of the tweets here:

and the 50 is up from @imVkohli …. Brilliant as always. #RCBvSRH

Watching Ab and Kohli bat together is literally the best thing ever #RCBvSRH — Sophy (@ViratKohli_xo) April 12, 2016

Hundred on offer for @ABdeVilliers17 ! With Watson to follow in the middle order – He could be so much more menacing this season #RCBvSRH — jatin sapru (@jatinsapru) April 12, 2016

Consistency in T20 is like sticking to one girl when you have too many proposals its that difficult and Kohli is doing that.. — Broken Cricket (@BrokenCricket) April 12, 2016

One of those games where the entire innings looks like the highlights package.
AB de Villiers and Virat Kohli are having some fun#RCBvSRH 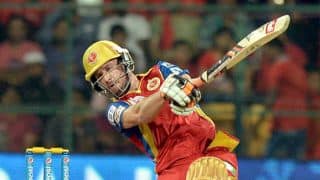 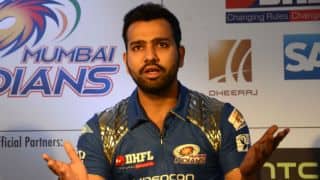