In his first game as Mumbai captain, Pollard blazed 83 off 31 balls against KXIP.

In a cute moment after Mumbai Indians‘ thrilling last-ball victory over Kings XI Punjab in game 24 of IPL 2019, the man of the moment Kieron Pollard picked up his little son Kaiden and engulfed him in a bear hug before the two shared a few words together.

Pollard has smashed ten sixes and three fours in a stunning 83 off 31 balls to take Mumbai Indians to the doorstep of victory at the Wankhede Stadium, before he was seventh out in the final over of the game. Mumbai chased 198 off the last ball to move to third place on the IPL points table, with stand-in captain Pollard – leading the franchise in place of the injured Rohit Sharma – named Man of the Match. (RECAP: Pollard s 31-ball 83 takes Mumbai to victory)

While speaking to iplt20.com after the match, Pollard asked his son Kaiden whether he enjoyed his innings.

“Well done, congratulations,” replied the boy, before he turned to the camera and said: “Happy birthday, Mommy.”

Smiling, Pollard told viewers that it was his wife Jenna’s birthday and then wished her all the best back in Miami.

From Sr. & Jr. Pollard, Mommy, this win is your b day gift

Little Kaiden congratulates papa @KieronPollard55 on a fab innings, in an exclusive chat after leading @mipaltan to a famous victory. By @Moulinparikh #MIvKXIP

In the ongoing IPL, Pollard has scored 179 runs in six innings for Mumbai, at a strike-rate of 194.56. (READ: Kieron Pollard a chance for West Indies?)

This was the first time Pollard was leading Mumbai, after Rohit was sidelined with injury to miss his first IPL game in 11 years. 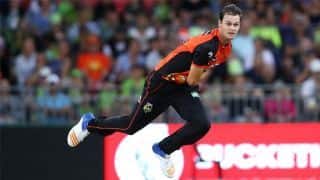