Chennai Super Kings (CSK) have a stranglehold over Mumbai Indians (MI) in the Indian Premier League (IPL) playoffs having won all three matches they played in the history of the championship.

Chennai Super Kings (CSK) have a stranglehold over Mumbai Indians (MI) in the Indian Premier League (IPL) playoffs having won all three matches they played in the history of the championship. Abhishek Kumar reflects on the past encounter between these two teams in playoffs.

It was the first time the two teams faced each other in an eliminator match where MI was seeking for revenge as they lost the final match against the same team in 2011. Put in to bat, CSK posted 187, with Mike Hussey and Subramaniam Badrinath laying the foundation and MS Dhoni and Dwayne Bravo finished the innings by scoring 73 runs in last 29 balls. In reply, none of the MI batsman could hold their nerves to the crease for long and lost the match by 38 runs.

The two teams faced in a playoff yet again in the following year and once CSK trumped, thanks to Hussey’s brilliance. Batting first, CSK put a huge total on board with Hussey and Suresh Raina scoring 86 not out and 82 not out at top. MI failed once again to put a decent partnership as no batsman could stay with only Dwayne Smith putting up a meaningful effort with an innings of 68 as CSK won the match by 48 runs.

MI batted first and scored a challenging 173 runs on board with Lendl Simmons and Mike Hussey scoring at top. In reply, CSK started aggressively and Raina’s half-century ensured yet another win for the southern team.

.  Michael Hussey has scored the most number of runs against MI in playoff matches with two match- winning knocks. He has scored 135 runs in just two playoff game against MI. Despite not playing regularly for CSK this season, the above stats will shows that he will be one of the key player in their next clash.

.  CSK have never played any of the playoff matches against MI at Chennai.

.  Dwayne Bravo has taken the most number of wickets against MI in playoffs.

.  Harbhajan Singh is one of the most effective bowlers against CSK both in terms of taking wickets and run-rate. Moreover, He has scored the fastest half-century this season and is currently in form player both with bat and ball.

.  Dwayne Smith, Ashish Nehra, Michael Hussey, and Dwayne Bravo are players who have played for both teams.

Grant Elliott provides cricket another ‘Spirit of the game’ moment 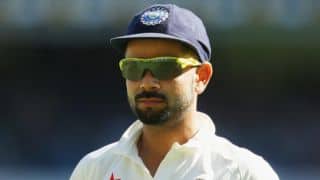 Virat Kohli to be rested; Rohit Sharma to lead in India vs Bangladesh one-off Test 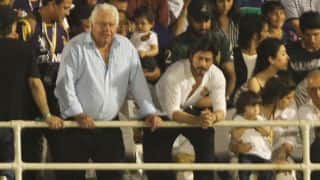