let’s take a look at 11 lesser-known facts about Ishant Sharma — one of the most capped Indian bowlers in Tests.

Born September 2, 1988, Ishant Sharma is an Indian cricketer who currently represents the Test team. A lanky fast bowler, he was tipped to be the next big thing in Indian cricket. Standing 6’4” tall, Ishant has the ability to generate bounce and is well equipped to move the ball both ways. He has been quick and canny but inconsistency has not let him achieve fruitful results. Ishant shot to limelight in the One-Day International (ODI) series against Australia Down Under, but has not replicated the magic in the recent times. With Ishant, one thing is definite, when he fires he wins you the game and when he does not, he will win opposition the game. There is either annoyance or delight. On his birthday, let’s take a look at 11 lesser-known facts about one of the most capped Indian bowlers in Tests.

2. International debut: Munaf Patel’s injury paved way for Ishant’s Test debut against Bangladesh in May 2007. He bowled seven overs in the first innings with one maiden and a wicket of Mashrafe Mortaza, which was his first wicket in international cricket.

3. Highest paid: In the opening season of the Indian Premier League (IPL), Ishant was roped in by Kolkata Knight Riders (KKR) for a whopping amount of $950,000. He was also the highest paid bowler in the tournament.

4. Downfall: After stunning the world with his pace, Ishant was expected to make it big in the international circuit. But soon, his pace decreased by a yard or two, which made him look less furious. When Ishant played his 50th Test in 2013, his average was among the worst averages for bowlers who had 50 Test caps.

5. Splendid run against England: During the second Test of Pataudi Trophy against England at Lord’s in 2014, Ishant came out all guns blazing and scalped seven wickets in the second innings while England were chasing 319. This was also his finest performance in Test cricket in an innings.

6. Engaged: In June 2016, Ishant got engaged to Indian Basketball player Pratima Singh and also opened up on his love story.

8. Trivia: Having played 80 ODIs after making his debut in 2007, Ishant is yet to play a World Cup game. That’s quite surprising for a bowler who was once the spine of the bowling attack.

9. Backing from Sehwag: During the Border-Gavaskar Trophy in 2008, Ishant tested the Australian side with his pace and bounce. In that series, he was the bowler who troubled Australian captain Ricky Ponting the most and many people do not know that it was Virender Sehwag who asked captain Anil Kumble to let Ishant bowl more as he had bowled long spells for Delhi. Further, Kumble gave him one more over and Ishant got the wicket of dangerous Ponting.

10. The unwanted record: Three out of top five highest individual scores in Tests against the Indian team have come in this century: Michal Clarke (329*), Brendon McCullum (302) and Alastair Cook (294). Interestingly, all these batsmen were dropped by Ishant earlier in those innings.

11. Partnership with VVS Laxman: During the first Test of Border-Gavaskar Trophy 2010 at Mohali, Ishant played a crucial role for his side’s victory on the final day of the Test. Ishant came at the crease when India were 8 down for 124 with 94 runs more to chase. The only recognised batsman present at the crease was VVS Laxman. Both played courageously, especially Ishant as he is not a proper batsman and scored 31 runs from 92 balls. Ishant got out at the score of 205 but he increased the probability of India’s victory. Later, Laxman and last man Pragyan Ojha ensured India’s win by 1 wicket. 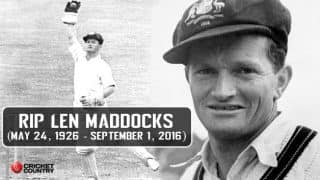