Grant Elliot, who has not played a One-Day International (ODI) since November 2013 has been drafted in the squad

New Zealand all-rounder Jimmy Neesham was left out of New Zealand’s 15 member World Cup squad, while Grant Elliot, who has not played a One-Day International (ODI) since November 2013 has been drafted in.

Another major surprise was fast bowler Matt Henry missing out being a part of the squad. Henry was one of the most successful New Zealand bowler last year, picking up 19 wickers from just six ODIs. The pace department will be led by Tim Southee and Trent Boult, backed up by Mitchell McClenaghan, and Adam Milne, who is among the fastest bowlers in the world today. The vastly experienced Kyle Mills has also been included in the side.

Squad photos – this is all players except Dan Vettori who couldn’t make the event #backtheblackcaps #cwc15 ^RI pic.twitter.com/yM0X21O2Uw

The World Cup will be held in Australia and New Zealand, and the Kiwis, who have been in an excellent form recently, would be one of the favourities to lift the trophy. New Zealand play their first match in the tournament opener against Sri Lanka at Christchurch on February 14. 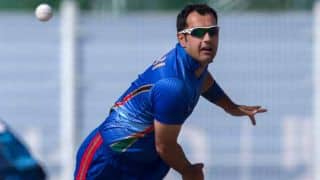