Jonty Rhodes is arguably the greatest fielder the world has seen.

Jonty Rhodes, born on July 27, 1969, is arguably the greatest fielder the world has seen. Announcing himself with the horizontal leap that ran out Inzamam-ul-Haq during the 1992 World Cup, Rhodes went on to become an icon at point. In many ways, he revolutionised fielding in cricket and some of today’s brilliance is all credit to him. Nishad Pai Vaidya picks 10 instances of Rhodes’ brilliance at the highest. This is by no means an exhaustive list but puts together the different ways in which he showed his talent on the field of play.  [Jonty Rhodes the adventurer]

“Is it a bird? Is it a plane? No, it’s Jonty!” was the headline of a newspaper after Rhodes announced himself to the world with this fantastic piece of fielding. It can be said that this was the turning point for fielding in cricket, which was almost considered a necessary chore rather than a third department. During the 1992 World Cup game between South Africa and Pakistan, the ball lobbed off Inzamam-ul-Haq’s pads and went towards point. The Pakistan batsman made a few strides forward to take a possible single, but Rhodes was onto it like a hare. Dashing in from point, he picked up the ball and sprinted towards the stumps. As Inzamam tried to make it back, Rhodes put in a full-length dive and shattered the woodwork. The leap remains one of the most iconic pictures in cricket. The star named Jonty Rhodes was born!

This effort stands testament to Rhodes’ agility and prowess as an athlete. With England struggling against South Africa in their 1999 World Cup, the match was heading towards a dull end when Rhodes livened up things with his artistry. Robert Croft tried to hit one over Rhodes at point. Rhodes leapt in the air and palmed it, unable to catch it in that attempt. The ball lost pace and was falling behind Rhodes, who turned as he came down and completed the catch. All that happened in a second or two. This went onto become a major part of a video segment in a popular computer game.

3.  Winning the Man of the Match for fielding

Champions raise the bar with each passing game and Rhodes took it up by several notches when South Africa met the West Indies at the Brabourne Stadium in 1993 in a Hero Cup encounter. It looked as if he covered almost every inch of the ground. Brian Lara was caught when Rhodes dived forward to take a skier. The crowd roared “Jonty, Jonty!” as he pulled off one catch after another. Phil Simmons was caught at mid-wicket as Rhodes flew to his left and clutched it one handed. Anderson Cummins was then dismissed when Rhodes leapt to his left at point and held another one-handed screamer. The other two catches were fairly simple by Rhodes’ standards. With five catches in the bag and innumerable stops in the field, he was awarded the Man of the Match.

Give him some width and Sachin Tendulkar would crash the ball through the off-side. But the South African bowlers had that extra protection with Rhodes manning the point area. During a One-Day International (ODI) during India’s tour to South Africa in 1997, Tendulkar crashed a wide one through point and could have been forgiven to believe it is through for four. Rhodes dived to his left and was almost parallel to the ground as he pouched it with both hands over his head. Tendulkar walked back stunned as Rhodes celebrated another magnificent effort.

Damien Martyn never hit the ball with force, but the pure timing would make the ball fly off the bat. During an ODI between Australia and South Africa in 2002, Martyn tried to thrash Makhaya Ntini through point, but Rhodes dived to his right and held it. As usual, Rhodes had very little reaction time, yet pulled it off nonchalantly. This was his 100th catch in ODIs and it was fitting that he celebrated the occasion with a special effort. [World record – unmatched in over 40 years and 3,672 ODIs]

Unlike his teammate Martyn, Matthew Hayden hit the ball hard and was severe on the bowlers with his brute force. During a game in the same series in 2002, Hayden had started off well and was looking to attack the bowling. He crashed a wide one from Kallis through point, only to see Rhodes fly to his right and hold it one-handed. Hayden left the field knowing that he was outsmarted by the best.

This was a duel between a fielder and the batsman. In a South Africa-West Indies ODI at Cape Town in 1993 Desmond Haynes blocked one on the off-side and called for a single to get off the mark. Rhodes sprinted from point the moment he saw Haynes block. He reached the ball even as Haynes was struggling to make his ground and dived forward to underarm the ball onto the stumps at the non-striker’s end. Haynes was found short! South Africa were defending only 140 and Rhodes’ brilliant run-out helped them begin a great fight back.

In the 1996 World Cup encounter between New Zealand and South Africa, the Proteas bowlers were strangling the Kiwi batsmen. Rhodes played his part in that as well. Shane Thomson played one behind point and called Adam Parore for a single. Rhodes stopped it by diving to his left, and recovered quickly to take aim and shatter the stumps. The quickness with which he recovered from his dive and managed to throw down the stumps is what makes this effort special. Parore had to walk back.

9.  Beating Brian Lara in the race

During an ODI between South Africa and the West Indies, at Lahore in 1997 Carl Hooper dropped one to point and called Brian Lara for a single. Rhodes ran in to pick up the ball, invoking memories of the run-out of Inzamam. With Lara sprinting in, Rhodes dived forward and hit the stumps with an underarm throw. What made this difficult was that he had only one stump to aim at and had to decide whether he wanted to shatter it himself in the split second. Instead, he let the ball go and dismissed Lara.

This wasn’t so much about Rhodes’ brilliance as much as his aura. In a game at the Melbourne Cricket Ground (MCG) in 1998, Adam Gilchrist crashed one through point and the batsmen called immediately. Rhodes stopped that ball to his left and there was confusion in the middle. Both batsmen stopped and ran towards the non-striker’s end. Rhodes had the time to lob it to the bowler, who then threw it to the wicket-keeper to dismiss Mark Waugh. Jonty’s quick reactions and his aura had resulted in all that confusion for the batsmen and both invariably tried to make it through to the safer crease. 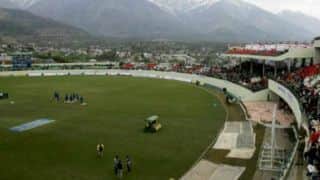