Together they have scored 1,349 runs this season for Royal Challengers Bangalore (RCB). It is safe to call AB de Villiers and Virat Kohli as two of the greatest batsmen of this generation.

Together they have scored 1,349 runs this season for Royal Challengers Bangalore (RCB). It is safe to call AB de Villiers and Virat Kohli as two of the greatest batsmen of this generation. RCB’s bowling displays have been ordinary and these two top men have fuelled RCB’s progress so far as the Bengaluru-based franchise still have a chance to qualify for the Play-Offs.

Saturday saw the only second instance in history of Twenty20 (T20) format when two batsmen from the same side went on to score hundreds. No surprise that the men were de Villiers and Kohli, and this time at receiving end was Gujarat Lions (GL). In the process, Kohli became the only cricketer in IPL history to register three tons in a season. The duo added 229 from just 96 balls for the second wicket with Kohli scoring 109 from 55 balls and AB smacking an unbeaten 129 off just 52. READ MORE: Highest team totals in T20 cricket

Witnessing the carnage, English wicketkeeper Jos Buttler could not help but tweet the following:

Fair enough, Argentina’s Lionel Messi and Portugal’s Cristiano Ronaldo are undoubtedly two of the best footballers of this generation. Buttler, an explosive batsman himself, isa part of the Mumbai Indians (MI) camp this season. On Monday, it was again a Kohli-AB show at Eden Gardens in Kolkata. Chasing 184 against a strong KKR side, the duo added 115 for the second wicket. While Kohli remained unbeaten on 75, de Villiers smacked 59 not out. They made the chase look easy and mind you, Kohli had split his webbing while fielding. ALSO READ: Royal Challengers Bangalore beat Kolkata Knight Riders by 9 wickets at Kolkata, Stars and Flops

Sunrisers Hyderabad (SRH) skipper David Warner, whose side are the table-toppers at the moment, was giving Kohli a run for the money with Orange Cap. Warner could not hold back after watching RCB’s performance on Monday and tweeted: 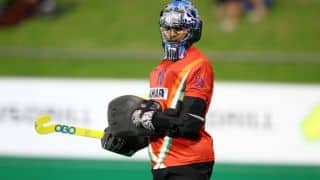