The West Indian after the defeat against SRH was eligible for playing, but the Gautam Gambhir side opted not to select him in the playing XI.

Defending champions Kolkata Knight Riders (KKR) so far have had an inconsistent eighth edition of the Indian Premier League (IPL). Three wins, three losses and a rain affected draw sums up KKR’s IPL season so far. What has hurt the side is the fact that their charismatic bowler Sunil Narine hasn’t fired yet and now it seems the chances for that to happen is pretty rare. Narine, who has been a prolific performer for KKR since joining the side in 2012, has not found the line and length after his reinforced action.

Fresh reports have piled more misery on the franchise as well as on the West Indian, which says that he has been barred from bowling off-spinners in all matches organised by the Board of Control for Cricket in India (BCCI), including the ongoing cash-rich IPL.

(READ: Is Sunil Narine losing his Midas touch with the ball?)

Narine had given a biomechanical test in Chennai after being reported for a suspected illegal action again during the IPL tie against Sunrisers Hyderabad (SRH) in Visakhapatnam on April 22. After reviewing the footage of the game and analysis in Chennai, the BCCI has taken a decision to ban his off-spinners.

“Following the provisions of the IPL Suspected Illegal Bowling Action Policy, the Committee has concluded that Narine’s bowling action for his off-spinner, contravenes Law 24.2 (as read with Law 24.3) of the Laws of Cricket and therefore the player is now banned from bowling the off-spinner in matches organised by the BCCI, including the IPL. He may however continue to bowl his other deliveries (the knuckle ball and the quicker straight ball),” the BCCI statement issued a statement in a report from Press Trust of India (PTI).

“If Narine were to again bowl the off-spinner in this season’s IPL, the on-field umpires would apply Law 24.2 and call “No ball” and, at the end of the match, would issue a further report,” the statement further read.

“Pursuant to clause 3.4 of the IPL Suspected Illegal Bowling Action Policy, the player would in such circumstances automatically be suspended from bowling in BCCI-organised matches.”

The West Indian after the defeat against SRH was eligible for playing, but the Gautam Gambhir side opted not to select him in the playing XI.

“Narine may undergo a course of bowling rehabilitation and take corrective measures to ensure that his action does not contravene Law 24 and may then request a further Official Assessment by the Committee,” said the BCCI.

The spin magician was earlier banned by the board when he came under the scanner during the 2014 Champions League Twenty20 (CLT20), where he was not given permission to play for KKR in the grand finale against the Chennai Super Kings (CSK) after getting reported twice.

With the ban on his off-spinners, Narine’s return to cricket has been ugly and short-lived. The impact of this decision is bound to be felt by KKR and their fans. 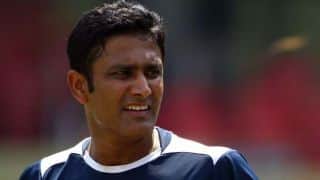