Kohli took to social media to post a picture of Roger Federer, himself and Anushka Sharma.

Kohli took to social media to post a picture of Federer, himself and Anushka.

The official twitter handle of the Australian Open also tweeted a picture of the trio, who were all smiles captioning it as “three legends, one photo.” Federer, who is the defending champion at the Australian Open, has already sealed a place in the last 16 of the competition with a win against American Taylor Fritz on Friday.

Kohli on Friday led India to a 2-1 over Australia, their first against the hosts in a bilateral ODI series Down Under. India also became the first country to return from Australia without losing a single series, having won the Test series 2-1 and drawn the T20 Internationals 1-1. 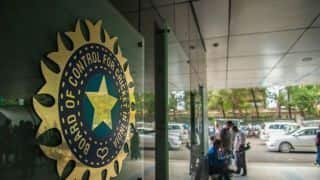