Earley Cricket Club in Reading a town 40 miles (64 kilometres) west of London had already introduced a vegan tea for their players.

WG Grace and Don Bradman may be spinning in their graves at the news an English cricket club have switched to using a vegan ball from the traditional leather one.

Earley Cricket Club in Reading a town 40 miles (64 kilometres) west of London had already introduced a vegan tea for their players.

That was down to their founder and chairman Gary Shacklady who found most cricket club teas consisted of ham sandwiches, not much use to him when he became a vegan.

Now they have gone the full hog and introduced a vegan cricket ball a synthetic animal products-free one covered in rubber instead of leather.

“It does behave like a leather cricket ball, but it bounces more and it’s more difficult to grip,” Shacklady told the Daily Mail.

“But we’re enthused by it and we’re hopeful of finding a better version.”

READ: Hashim Amla thanks fans, hints he was underused as a bowler

Shacklady, who founded the club 12 years ago and at 33 is the youngest cricket club chairman in England, is hoping other clubs in their Berkshire Cricket League will follow their lead.

The school teacher says there was not much opposition when he proposed switching the tea to a vegan menu two years ago.

Ham and beef sandwiches have been replaced by the likes of Moroccan tagine, lasagne and meat-free spaghetti Bolognese.

“The teas have been well received as our players understand and support the reasoning behind the decision,” said Shacklady, who set up the club 12 years ago.

“When other teams come to us, they pile their plates high. And when they eat the food, nobody complains.

“Although you usually get one middle-aged white man who is horrified – it’s fine, he doesn t have to eat it. But the point is that everyone can.” 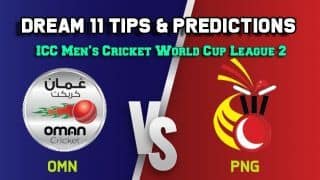