The previous record was of 334 not out, which was made by the then 15 year-old Nikhilesh Surendran in an India school fixture in Hyderabad in 2008.

In a 45-over match, a team total of 350 is considered to be a match-winning score but with the changing trends in the shorter format an international triple ton may well be on the card. Of course, Rohit Sharma with 264 last year came close and one never knows what an AB de Villiers can do if he decided to carry his bat. While that hasn’t happened yet in international cricket, Liam Livingstone, a 21-year old from Lancashire encrypted his name in the books of history by scoring a record-breaking 350 runs in a club match on Sunday.

In their National Club Championship clash at home against north-west side Caldy, Livingstone’s ravishing innings was the centre of attraction of Nantwich’s gigantic score of 579 for 7 in just 45 overs. His innings came off of just 138 deliveries which included 34 fours and 27 sixes.

“Had worse days! Thanks for all the messages,” he tweeted.

The previous record was of 334 not out, which was made by the then 15 year-old Nikhilesh Surendran in an India school fixture in Hyderabad in 2008. Livingstone now holds the record of highest individual score in any form of one-day match.

Three of Caldy’s bowlers, went for more than 100 runs in their spell, they all play in the Liverpool and District Competition, which was once regarded as England’s leading club leagues. Caldy had one of their worse days as they floundered to 79 all out. Nantwich won by a huge margin of 500 runs, they were probably distressed by what happened to them in the field before. Livingstone is yet to make his First Class debut and that may not be far off. Livingstone added 290 with Ben Johnston and Nantwich CC tweeted about the partnership from their account along with the photograph of both the players posing with the scoreboard. 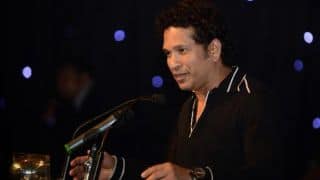