Despite leaving the IPL on April 30, Warner comfortably finished with the most runs.

Australia opener David Warner secured the Orange Cap for most runs in IPL 2019 by a safe distance, despite having not played a match since April 29 when he left Sunrisers Hyderabad to join his World Cup team-mates for a pre-tournament training camp in Brisbane.

During his comeback to the IPL after serving his sentence for ball-tampering in South Africa last year, Warner amassed 692 runs at an average of 69.2 and strike-rate of 143.86 for SRH before returning home. In his final match of IPL 2019, Warner s 81 off 56 balls in Sunrisers big win over Kings XI Punjab was his ninth 50-plus score of the season.

In the Purple Cap table for most wickets in IPL 2019, Imran Tahir finished on top with 26 wickets for runners-up Chennai Super Kings. 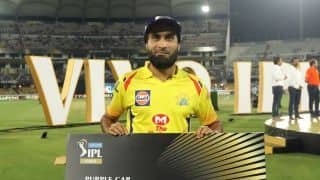