Imran Tahir claimed 26 wickets for CSK, the most in a single IPL season by a spin bowler.

South Africa legspinner Imran Tahir won the Purple Cap for most wickets in IPL 2019 after surpassing his international team-mate Kagiso Rabada with two wickets for Chennai Super Kings in the IPL final in Hyderabad on Sunday.

This is the record for the most wickets in a single IPL season by a spin bowler. The previous record was 24, held by Harbhajan Singh (2012) and Sunil Narine (2013) respectively.

This season, Rabada took 25 wickets in 12 matches for Delhi Capitals before he was injured and missed the franchise’s last four fixtures.

On the Orange Cap table for most runs in IPL 2019, Sunrisers Hyderabad opener David Warner was the winner by a comfortable margin despite having last played an IPL match on April 28.

Warner finished the league with 692 runs from 12 innings.

Mumbai Indians beat CSK by one run off the last ball of Sunday’s final to claim their record fourth IPL title. 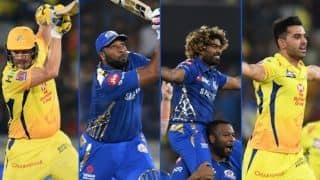