It is the exciting time of the year! With the ICC World T20 commencing on Tuesday and the ninth season of Indian Premier League (IPL) to soon follow, the next three months will not be any less than a feast for the cricket lovers. The qualifiers, or the first round of the mega event has started with the Zimbabwe-Hong Kong clash, where the former prevailed quite comprehensively.

But with the first week of the tournament witnessing double headers, we are all set for the second match of the day where rising Asian side Afghanistan will take on blow-hot-blow-cold Scotland in Nagpur. The two teams share some history, as it was against Scotland at Dunedin in another World Cup almost a year back that Afghanistan registered their historic first ever win in a world cup game.

It was a close encounter, which had a thrilling finish as Scotland lost out in the last over after failing to remove the last Afghan pair. Tuesday’s match, though in a different format, promises same action and excitement. The match will start at 7:30 PM Indian Standard Time (IST), giving much respite from the hot weather to traveling teams. Catch the live action as we bring to you the link for the live streaming here. 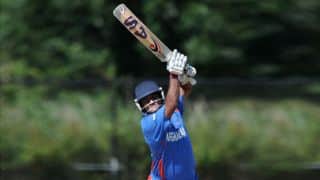