The 12th match of the ICC World Twenty20 (T20) 2016 Qualifier is going to be played between Bangladesh and Oman at Himachal Pradesh Cricket Association Stadium, Dharamsala. This is a do or die match for both the teams as whoever wins will directly qualify to super 10 stage in group 1 and will be playing against Sri Lanka, South Africa, West Indies and England.

So far, Oman has won only one match and the other match was washed out and similar happened with Bangladesh as well. Since the match is being played at Dharamsala, so rain is expected to interrupt in between and if this match ends with no result then Bangladesh will directly qualify to the next stage because of better net run rate than Oman.

Expect an exciting encounter between these two teams. The match will start at 7 pm Indian Standard Time (IST) and will be telecast live. Catch the live action as we bring to you the link for the live streaming here. 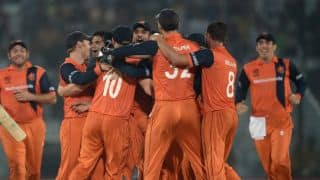 ICC World T20 2016: Mohammad Aamer sweats it out at nets at Eden Gardens