The injuries have affected Sri Lanka’s progress but nevertheless they have displayed some inspiring cricket and will look to notch a comfortable win against Scotland.

Bangladesh beating England meant that they have toppled England to qualify for the quarterfinals and from Pool A, we know the four quarterfinalists. But what matters are the positions the teams end with. Sri Lanka will look to beat Scotland in order to finish ahead of Bangladesh.

The injuries in the middle of the tournament have affected Sri Lanka’s progress but nevertheless they have displayed some inspiring cricket and will look to notch a comfortable win against Scotland, who have lost all their four matches.

Scotland on the other hand will be hungry to register their first win. The Scottish side has played well in patches and despite of being in good position at times, they have failed to convert them to wins, they will play with pride at stake.

The match starts at 8.30 am IST and can be watched on Starsports.com. Criclife presents you with the pick of the tweets from this game:

Congrats to @OfficialSLC on the win and best of luck for the remainder of the tournament.

What next @KumarSanga2. As if the batting wasnt enough, he now goes past @gilly381 for most WC dismissals and gets to 501 in ODIS. #SLvSCO

That's how u become a legend. By keeping silent & making noise with your bat @KumarSanga2 you're a living legend! Can't wait 2c u at Surrey!

Wonder how nervous South Africa are about playing the prolific Sri Lankans in a quarter final on the flat @scg. Bat first! @cricketworldcup

#SL been reviewing so horribly past few matches that when they ACTUALLY review for something sensible, everyone's like WTF! #cwc2015 #slvsco

This is now @CricketScotland's highest total batting 2nd against a Test nation in ODIs, beating 184 vs #Eng earlier in this tournament.

A grandstand finish is in store in Hobart! SCO 190-5 and looking to launch! Who are you picking? #SL or #SCO? #SLvSCO pic.twitter.com/Gsj5PV4Br7

Just clipping leg-stump so the decision remains and Machan has to go for 19. Coleman the new man in. Scotland 44/3 after 11.2 overs.

BOWLED! Kulasekara strikes this time. It is full, swinging and too good for MacLeod. #SCO slip to 26-2. #SLvSCO pic.twitter.com/AoGuuGsoDP

In-swinging delivery by Kulasakara rattles off MacLeod’s pads and into his stumps, he goes for 11. Scotland 26/2 after 7.3 overs.

Five overs down & #SCO has moved onto 18-1 after losing an early wicket. LIVE: http://t.co/DcZKEKryqG #SLvSCO pic.twitter.com/Tu63jQiZGH

Ouch! Berrington has been forced from the ground after his shoe disintegrated. LIVE: http://t.co/foKmE9hEVg #CWC15 pic.twitter.com/yQyoaYaBTC

Sri Lanka bring up 350 against Scotland in Hobart. The final over coming up. #CWC15

That Sanga-Dilshan partnership was the only one of consequence. #Sco have taken all their catches bar 2! #cwc2015 #slvsco

Might seem crude but it’s good that the lower middle order is getting a hit and opportunity to finish innings.. Just what SL need #SCOvSL

Watching the way @KumarSanga2 is batting, it’s hard to believe he went unsold in the #IPL auction….

@KumarSanga2 reminds me of a sidewalk artist,who,over the years has in his understated style,created a masterpiece in the art of batsmanship

Four 100s in a row. Better than the CBSE topper marksheet.

Grudgingly the BCCI will create a Best Left Handed Batsman in the world slot for Kumar Sangakkara. The SLC may not even do that. #SLvSCO

Huge fan of SL cricket. Competitive on the pitch & probably the nicest and most approachable bunch of guys off it. Love it when they do well

After 18 overs Sri Lanka have moved on to 1/86, Dilshan and Sangakkara looking set for another huge partnership #CWC15 #SLvSCO

Question for you @RusselArnold69. Is Kusal suited to the middle order. Opened in 35 of 39 inns. Tho 3 of those middle order inns were in Oz!

Sri Lanka move to 70/1 in the 15th over. Sangakkara and Dilshan bring up the 50 run partnership from 53 deliveries.

Kusal Perera started his career in Oz 2 yrs ago. Every inns in Australia he has batted in the middle order. Rest all bar one he opened.

One of the reasons Sanga does so well so consistently is that he knows he can’t rely on his middle order. #CWC15 #SLvSCO

What a shot! Dilshan through cover, effortless, to the boundary. #CWC15 #SLvSCO

Davey comes into the attack, but Dilshan plays a glorious straight drive back past the bowler for four. Sri @OfficialSLC 42/1 in the 10th.

#Sanga comes in. Can he make it four tons in a row today? #SLvSCO #CWC15

Would be great to see Sanga make it 4 on the bounce..even more impressive in a World Cup..#legend

SL bat .. I like the combination.. Thisara at 7.. Chameera in and Seekki in ahead for Satchi… Kusal plays for Upul. pic.twitter.com/4b3Y0hyzRP — Russel Arnold (@RusselArnold69) March 11, 2015 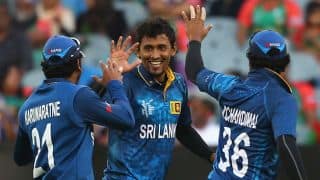