Mark Wood was the one who took the final wicket of the Nottingham Test which decided the series in England’s favour.

Born, January 11 1990, Mark Andrew Wood is an English fast bowler, who bowls at a menacing pace of around 90 mph and is very much hit-the-deck hard kind of a bowler. Wood made his international Test debut last year and was also a part of the England side which won the Ashes. In fact, he was the one who took the final wicket of the Nottingham Test which decided the series in England’s favour. On his 26th birthday, Abhishek Kumar looks at 10 interesting facts about the young gun of England.

1. Cricketing family: Coming from the town of Ashington, Wood’s uncle — Neil Wood was also a cricketer in his days and represented Northumberland.

2. Idol: He idolises England’s former fast bowler Steve Harmison as he hails from the same Ashington town in Northumberland where the latter comes from.

3. Composed Test debut: Wood played his first international match against New Zealand at the iconic stadium of Lord’s in the first Test. He took three wickets by conceding 93 runs, which included the likes of Brendon McCullum, Corey Anderson and Tim Southee. He took one more wicket in the match which turned out to be the turning point by sending BJ Watling back to pavilion for a score of 59.

4. Impressive T20I debut: Wood made his Twenty20 international debut against the same team and scalped three crucial wickets, which included brothers Brendon and Nathan McCullum along with Southee in his spell of three overs.

5. The dancing Wood: Wood is probably a multi-faced personality, especially when he is on the field. The atmosphere is always ecstatic when Wood is playing as he keeps entertaining his team as well as the crowd with his antiques and some random dance moves.

6. The imaginary horse of Wood: Till now, there is no name given to his imaginary horse but whenever it comes in him, smiles can be spotted on everyone’s face. The very first time it was seen in his debut Test match, when he took Southee’s catch. He has previously revealed that he has an imaginary horse he brings out when bored in the field. It is probably his third personality. He also calls himself the ‘Joker’ of England team.

7. Funny scenes at the dressing room: After winning the 2015 Ashes, Wood was on a roll and didn’t stop entertaining. For a moment he got a bit serious but during Ian Bell’s interview in the dressing room, Wood couldn’t resist himself and was seen dancing in the background in the below video.

8. Best ball by Wood: In an interview with alloutcricket.com, Wood revealed about his best delivery till date and said, “The bouncer to Watling when we were chasing the game at Lord’s after they’d got a partnership going. I’d like to think that’s the sort of delivery I can bring, something out of nothing. And the one I enjoyed the most was the Hazlewood yorker at Trent Bridge because I set that one up and executed it well. “

9. Worst job: In his last Test series against Pakistan in UAE, Wood showed some resistance with the bat in hand. Maybe, in future, England may consider him as a nightwatchman, which he hates and also doesn’t like to stand at short-leg. In an interview with alloutcricket.com, he once he said, “I hate that role! It’s the worst job in cricket. That and short-leg – I sympathise with them lads like. Nightwatchman’s good if you survive until the next morning but on the night-time when you can’t play any shots – that’s not great. You feel like you’re just a standing target. I would love to get a Test fifty first, and then hopefully move up the order.”

10. Childhood dream: In his childhood days, Wood originally wanted to become a footballer and was on the books with Newcastle, when he was 10. 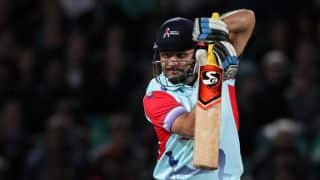