Misbah-ul-Haq recently revealed in his blog for cricket.com.au that he was offered the role of captain in a clerk’s office at PCB headquarters in Lahore.

After the controversial tour of England in 2010, it was certainly difficult for the Pakistan Cricket Board (PCB) and many senior players to step up and take the charge as their next skipper. The series is widely remembered for the spot-fixing scandal, which led to ban of three big players — Salman Butt, Mohammad Amir, and Mohammad Asif.

After Salman Butt, PCB were probably looking for a man who could lead the side in a better way and sanitise the tainted image. Pakistan had long played the musical chair game and Misbah-ul-Haq was trusted with the job. who till then had became a big face in Pakistan cricket and was known for his patience and calm nature. Misbah was then 36, probably they thought it would be a stop-gap arrangement but a better option wasn’t in sight. They offered him the captaincy. ALSO READ: After taking Pakistan to No.1 Test ranking, Misbah-ul-Haq gets a strange request from wife

Misbah recently revealed in his blog for cricket.com.au that he was offered the role of captain in a clerk’s office at PCB headquarters in Lahore. “The chairman wanted to keep the meeting confidential and as it has been reported in the media recently it was arranged in a clerk’s room where I was offered the captaincy. I kept it a secret too and, owing to the state of affairs at that time, did not share it even with my family,” Misbah wrote.

Misbah also spoke about the process of team handling in his column and explained, “I knew handling the team in these circumstances would be a massive challenge but the thought in my mind was that if the Almighty had given me the opportunity to lead the team, He would assist me to make it a better unit, too.” READ MORE: Pakistan become No.1 in Tests; Twitter reacts

They were ranked sixth after their England tour in 2010 and after six years they became the top team in Tests.

“It is a huge achievement to be at top of the world. It is just like winning a World Cup for your team, therefore everyone in the team wanted to touch the summit no matter whether it was for a day or a week or a month. The number one tag was in the minds of all the players and it motivated us a lot,” Misbah wrote.

This is indeed a huge achievement especially if we recognise the fact that they did not play a single Test in their home, Pakistan. 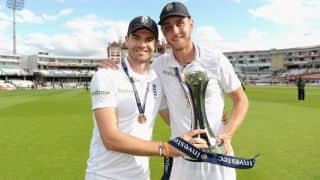