On the second day of the third Ashes Test at Edgbaston, Johnson reached the milestone of 300 wickets by sending back English batsman Jonny Bairstow with a fierce bouncer.

Australian paceman Mitchell Johnson was first noticed by the legendary Dennis Lillee at the age of 17. He was destined to be successful and he has really made it big. On the second day of the third Ashes Test at Edgbaston, Johnson reached the milestone of 300 wickets by sending back English batsman Jonny Bairstow with a fierce bouncer. Later he also got the wicket of Ben Stokes.

England were in a good position after James Anderson’s six wicket and getting Australia all out for just 136 runs.

Johnson became the fifth Australian bowler to enter the 300-club, the others being his mentor Lillee, Shane Warne, Glenn McGrath and Brett Lee. The cricket world congratulated his feat on Twitter and here are some of the reactions:

So happy Johnson has joined Warne as only Australians with 300wkt 2000run double after early struggles in his life and career. #SuperMitch

Outstanding opening over from Mitchell Johnson. Forced Bairstow & Stokes to smell the leather with some high quality chin music #testcricket

No greater frightening sight for a batsman than Johnson all fired up. Two quick wkts today & 300 overall show his great value for Australia

KP was top scorer when Johnson terrorised England in last Ashes series & handled the pace better than anyone else. #BringBackKP

Ripping deliveries @MitchJohnson398 to bring up his 300 and 301 wickets. Congrats on the milestone. Who said test cricket is dead. #ashes

Ferocious from Johnson. This is exactly why we needed Kevin Pietersen. You need world class & experience to handle this stuff. #Ashes

Mitchell Johnson sending shivers down the batting spine. Stokes gone for a duck. Another brute.

Congratulations to @MitchJohnson398 on taking your 300th Test wicket. Really proud of you mate. Plenty more to come #Ashes

By the way that is 300 wickets for Mitchell. One of the great men. 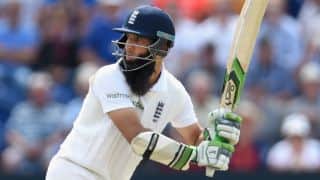