Dhoni has taken a flight across the Atlantic Ocean to visit the Shri Siddhivinayak temple at New Jersey.

Mahendra Singh Dhoni does just anything and everything worth doing. Here we see Dhoni who was para-gliding at a military base camp in India, has taken a flight across the Atlantic Ocean to visit the Shri Siddhivinayak temple at New Jersey, as reported by PTI.

Sportspersons are known to be superstitious and religious, with Dhoni being no different. Interacting with the crowd in New Jersey, Dhoni said, “Keep supporting us. We have a good side, we have a good team. We are in a phase where we are going through a lot of changes but with all due support of yours, we will keep doing well.” [Also Read: MS Dhoni with another trophy!]

The gathering cheered the popular Indian captain and many flocked him for selfies. 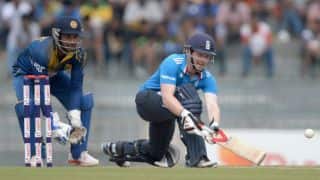 England vs Australia 2015: Eoin Morgan asserts he is fresh and fit for one-off T20I