Somehow, the team salvaged resurgence with two wins and it seems that they have struck form at the right time.

In the Indian Premier League (IPL), Mumbai Indians (MI) has been a team which has enjoyed a huge fan base. The brand of cricket that the team has played over the years has won them many fans around the globe. As a Twenty20 team, they have achieved great success. Winning the Champions League T20 in 2011 and 2013, and winning the IPL in 2013.

But this year has not gone well for the team as they have just managed two wins in seven matches. The team in this edition suffered consecutive four losses, which hurt the team morale badly. They received further setbacks when they lost the services of Aaron Finch, Josh Hazlewood and Corey Anderson. Somehow, the team salvaged resurgence with two wins and it seems that they have struck form at the right time.

With a busy schedule ahead, the MI paltan, which consisted of skipper Rohit Sharma, Harbhajan Singh, Parthiv Patel, Pragyan Ojha, Ambati Rayudu, Hardik Pandya, Suchith Jagadeesha and Jasprit Bumrah took some time for their leisure and clicked a royal selfie. The official Twitter page of MI, posted the selfie where the players are seen wearing gleaming MI hats and flashy goggles.

Previous year, the team lost five straight games and it seemed that their they had no chance to qualify. With five losses in seven games, the script seems to be heading the same way but only time will tell what is in store for them. 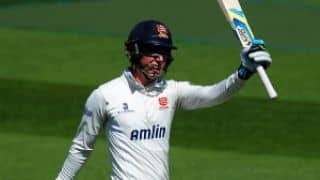