Rahman had a terrific outing in the recently conluded Indian Premier League for his side Sunrisers Hyderabad as they emerged as the champions in the cash rich extravaganza.

Bangladeshi pacer Mustafizur Rahman has been a threat to the batsmen in the death overs in the shorter formats. His ability to bowl immaculately in the death overs stands him apart from his imminent peers. Rahman had a terrific outing in the recently concluded Indian Premier League for his side Sunrisers Hyderabad as they emerged as the champions in the cash rich extravaganza. Rahman earned the nickname ‘Fizz’ and on this occasion he opens up on this mystery. READ MORE: IPL 2016: Most memorable moments, Part I

Mustafizur was quoted while speaking to ATN news saying, “Hathurusinghe (Chandika) gave me the name. Mustafizur Rahman name is bit big. That’s why coach gave me this name. One day, I did not see my name in a training session, but I saw Fizz. The coach said that it’s my name.” READ MORE: IPL 2016: Notable players who had little or nothing to do in season 9

It was a long time in India and all the hard work paid off for the canny bowler as he won the emerging player of the tournament award, a feat which was yet to be achieved by an overseas player. Mustafizur nowadays is widely acknowledged as ‘Fizz’ by his teammates and will be the player to watch out for in the near future. 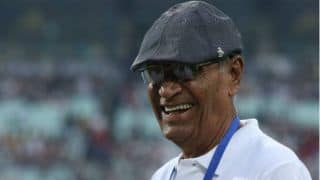