Highlighting Indian cricket team's domination of the hosts in a unique and amusing way, the Eastern District Police of New Zealand has come up with a warning for the citizens.

Highlighting Indian cricket team‘s domination of the hosts in a unique and amusing way, the Eastern District Police of New Zealand has come up with a warning for the citizens. (ALSO READ: Ruthless India aim to close out series)

India thrashed New Zealand by eight wickets and 90 runs in the first two ODIs to take a 2-0 lead in the five-match series.

It prompted the Eastern District Police to praise the visitors on social media.

“Police would like to issue a warning to members of the public about the exploits of a group touring the country at the moment,” the post, accompanied by a group picture of the Indian team, on their Facebook account read.

“Witnesses report seeing this group badly assault an innocent looking bunch of New Zealanders in both Napier and Mt. Maunganui in the last week. Extra care should be taken if you are carrying anything that looks like a cricket bat or ball.”

The post found a chord with the fans with former New Zealand allrounder Scott Styris also sharing a screenshot of the funny warning in his twitter accounts, saying: ‘very clever’.

India will take on the Black Caps in the third ODI at Bay Oval on Monday. 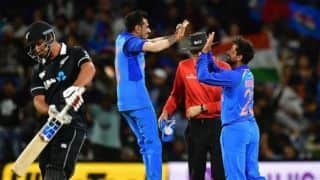