Akhtar celebrated his 41st birthday on Saturday and many former as well as contemporary cricketers wished him on social media.

Rewind to Eden Gardens 1999. The hundred thousand present at the stand erupted when Rahul Dravid was dismissed off a fullish toe-crusher from Shoaib Akhtar. Sachin Tendulkar, the nation’s favourite son made his way to the middle. Another inswinging super fast delivery, and Tendulkar had his stumps tumbling. His stay lasted a ball. Silence could be heard at the packed Eden.

That started one of the most intense rivalries in modern times. No fans would miss the Tendulkar-Akhtar contest. The best batsman of a generation vs the fastest of all-time. Tendulkar has smacked Akhtar many a times, while the express bowler too has got the better of the Master Blaster, however, years post-rivalry now the fierce rivals share good friendship. The duo continue to win hearts of fans and followers. They are a testament to the true spirit of the game. ALSO READ: Virender Sehwag keeps his promise; throws a Twitter party on Shoaib ‘Titanic’ Akhtar’s birthday

One of the most memorable incidents between them remains the one from 2003 World Cup clash where Tendulkar smashed a huge six over third man to Akhtar. The speedster later went on to dismiss him but not before the batsman had made a match-defining 98.

Akhtar celebrated his 41st birthday on Saturday and many former as well as contemporary cricketers wished him on social media. In fact, Virender Sehwag threw a party on Twitter and wished him in his unique style. Tendulkar, though not the quickest to wish, also conveyed his best wishes to Akhtar to which the bowler  also replied on Twitter. Moments like these are loved by everyone as once a rival are now good friends.

@sachin_rt thank you so much little master … 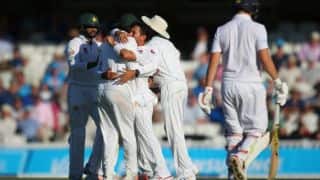