The South African sensation de Villiers has not only amassed runs for RCB, but also indulged in some massive partnerships with his skipper Kohli.

Indian run-machine Virat Kohli has broken all records this year when it comes to scoring in T20s. He started the year on a phenomenal note by notching seven fifty plus scores in eight outings in limited-overs cricket and then followed it up in the Asia Cup T20 and ICC World T20 2016. But all hell broke loose when the Royal Challengers Bangalore (RCB) skipper entered the Indian Premier League (IPL) season 9.

Kohli, who before IPL 9 had no hundred in the shortest format, has slammed four hundreds in the current season which is a record. Besides, he also broke Chris Gayle and Michael Hussey’s record of most runs in a single IPL season by a comfortable margin and has a great chance to become first player to get 1,000 runs in a single season of IPL.

One man who has watched him from close quarters is AB de Villiers. The South African sensation has not only amassed runs for RCB, but also indulged in some massive partnerships with his skipper. Being a senior in international cricket, he has also seen Kohli grow in the last few years during their time at RCB. So recently when the world was busy comparing the two modern-day greats, AB was all praise for Kohli, whom he also considers a legend. He apparently revealed funnily during an interview that Kohli as a junior used to take tips from him and today the roles have reversed.

The bonhomie and mutual admiration between the two greats augurs well for the game. 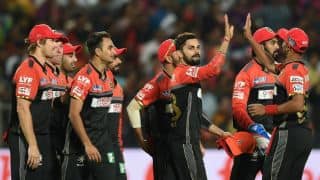