Photo: Dwayne Bravo bonds with Yuvraj Singh and Ashish Nehra ahead of semi-final

Photo: Dwayne Bravo bonds with Yuvraj Singh and Ashish Nehra ahead of semi-final
By

Dwayne Bravo is a playful cricketer; his presence ensures a calm and cool ambience in the dressing room. He may be an intimidating cricketer on the field but off it he’s a friendly personality. Bravo on this occasion was found gelling with Indian cricketers Ashish Nehra and Yuvraj Singh.

As India will take on West Indies in the second semi-final of the ongoing ICC World T20 at Mumbai, Bravo decided to build camaraderie with the two Indian stars. He instantly took to his Instagram handle where he posted a picture and wrote, “Cheers to seeing these two#Champions as well @yuvisofficial and#ashishNehra. Semifinals #INvsWI #wt20”

Bravo has been instrumental behind his team’s success as he has bowled magnificently well in the death. Nehra and Yuvraj too have been pivotal behind India’s run in the tournament so far. The battle will be one to watch out for as both the teams have enough ammunition to set Wankhede Stadium on fire. As of now, all eyes are set at Mumbai as the semi-final will be played in Thursday. 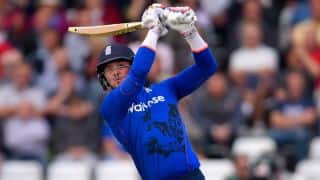