Pragyan Ojha was spotted clicking a picture with Shah Rukh at a party.

Cricketers and Bollywood stars share an old bond; they are often seen spending time together and sometimes even partying especially after the Indian Premier League (IPL). Shah Rukh Khan is one of the most reckoned faces in the world, the King of Bollywood have had soft corner for cricket as one can famously see through his dedication towards Kolkata Knight Riders (KKR) – a franchise which he owns in the IPL.

On this occasion, Pragyan Ojha was spotted clicking a picture with Shah Rukh at a party. Delighted Ojha took it to his Instagram handle and stationed a picture of them with captions which read, “It was nice meeting the Badshah Khan! #fanmoment”

It was nice meeting the Badshah Khan! #fanmoment

It’s an eye pleasing moment for every cricket fan to see stars from different fields getting along well. Earlier, many cricketers were spotted with actors and Shah Rukh has also hosted many celebration ceremonies and award distribution functions for the cricketers. Shah Rukh has been a livewire when it comes to cricket. Ojha is at present playing for the Bengal team in the domestic circuit and has done well for his new team. 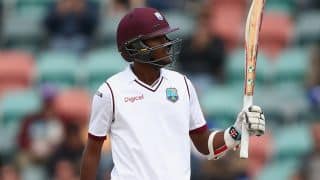 Jason Holder: West Indies have to put a collective effort in remaining Tests against Australia