Prasanna played his last Test against Pakistan in Lahore in 1978, and then followed his father's advice.

Erapalli Prasanna, one of the greatest Indian spin bolwers, is remembered for giving some of the legendary West Indies and Australian batsmen hard time with ball. He picked up 189 wickets in 49 Tests.

“I try to live a happy life. I play a little bit of golf. I have no complaints, because I’m letting time take over me. I am living life my way,” spin maestro Prasanna told IANS in a conversation for its “Where Are they” series.

The veteran cricketer played his last Test against Pakistan in Lahore in 1978, and then followed his father’s advice.

“Before he passed away, my father told me, ‘Remember son, you’re starting from Block A. And wherever you go, you’ll have to come back to Block A. You may touch new heights in life and gain new perspectives, but you will ultimately have to return to your roots in Block A.

“I never lost touch with my roots. I never cared much for fame in life anyway. Not that I got much of it, but never mind. Whatever attention came my way, I considered it the grace of God,” he said.

However, he feels the Board of Control for Cricket in India (BCCI) could have taken better care of past players. Between 1962 and 1967, he left cricket to pursue engineering degree.

“Back then education was given importance over other things. When I was selected for the West Indies series, I made a promise to my father I would complete my engineering degree. I left cricket on my return to fulfil my promise,” he said.

The hiatus could not affect the spinner’s passion for cricket and he made a comeback to the Test team in 1968.

Prasanna was considered a favourite of former captain Nawab MAK Pataudi. Pataudi always gave him precedence over others. “That’s because we both understood each other well and that made our work easier. We both believed in ‘attack’ and taking wickets. Our liking was mutual and natural,” he said.

Asked about his favourite Indian batsman, the senior cricketer named Vijay Manjrekar. “I bowled to him in the early 1960s. I also bowled to Sunil Gavaskar and Gundappa Viswanath. I can safely say these two (Gavaskar and Vishwanath) were the right and left hands of Manjrekar.”

A Padma Shri awardee (1970), Prasanna enjoys a retired life with wife and daughter. 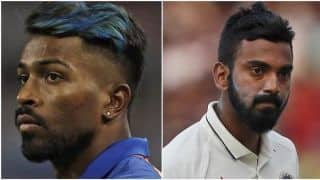