Rain wakes up the "child" in Virat Kohli

Rain wakes up the "child" in Virat Kohli

Virat Kohli, who has skipped the Zimbabwean tour, seems to be making the best of his break time. He is now enjoying the Delhi rains by bringing out the "child" in him.

Cricketers usually do not share a happy relationship with rains. Downpour can result in long delays and frustrating times in the dressing room with uncertainty. If it is a limited-overs game, then the haunting Duckworth-Lewis method adds to the worries. However, if you are not playing no one minds the rains. Indian run-machine Virat Kohli is making the best use of Delhi rains. ALSO READ: UK Prime Minister David Cameron demands Virat Kohli in exchange for Vijay Mallya’s extradition

Kohli, who has skipped the Zimbabwean tour seems to be making the best of his break time. The heavy rains in Delhi did not let him leave his home and he decided to bring out the “child” in him and pass his time by playing his favourite game on Sony Playstation.

When its raining outside and you are playing playstation and your favourite game on it, the child in you always wakes up. #unchartered4 #rainyday .

Kohli, an avid sports follower, had earlier congratulated LeBron James for leading Cleveland Cavaliers to their maiden NBA title. The Indian Test skipper was the highest run scorer in the Indian Premier League (IPL) and won the Player of the Series. Earlier this year, he won the Player of the Series in the ICC World T20 2014. Next month, he will lead the national side in West Indies for a four-Test match series. It was in West Indies, five years back, where Kohli made his Test debut. Today is the fifth anniversary of same. Gareth Bale: I like my own style of free-kick 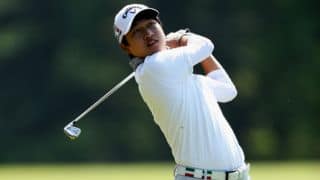