Indian team director Ravi Shastri, who has watched Sangakkara from his first international game, paid rich tributes to the southpaw and compared him with the likes of Sachin Tendulkar and Don Bradman.

An era ends in Sri Lankan cricket with the retirement of Kumar Sangakkara. He will play his last international game at Colombo against the touring Indians. Such is the Sri Lankan legend’s impact that even the opponents can’t stop praising him. [Also Read: Virat Kohli calls Kumar Sangakkara “lovely human being” and is honoured to play in his final Tests]

Indian team director Ravi Shastri, who has watched Sangakkara from his first international game, paid rich tributes to the southpaw and compared him with the likes of Sachin Tendulkar and Don Bradman.

“There are very few players who fall in that list [consistent players]. You can bring Sachin Tendulkar in that league as the kind of player that once broke into the top two or three never moved out of there. Sangakkara’s record shows you that. He has got runs world over and scored double hundreds like it is a pass time. He is equal with Sir Donald Bradman. We love Sanga for the way he has entertained and he has been a fantastic ambassador for the game of cricket. That is a legacy that he will leave behind. I think every Sri Lankan should be proud of what he has achieved not just personally but the way he has conducted himself in going round the world as an international cricketer. You can call him as one of the statesmen of the modern game. [Also Read: Look what Rahul Dravid has to say about Kumar Sangakkara!]

His ability to adapt and concentrate and his ability to bat for long periods of time. He had a wide range of shots, understood his game well and obviously worked as hard as any you would get. Also, his simple ability to assess the conditions very quickly, be it England, Australia, South Africa, West Indies or Colombo made him very special,” said Shastri in BCCI’s official website.

Shastri hailed the contribution of both, Sangakkara and Mahela Jayawardene, and said if they were playing for India, they would have been on “top of a tree”.

Having said that, no one took an eye off them, especially Sangakkara, because he was backed in the top three. He would either open or bat at No.3 which is one of the toughest positions to bat. He would just pile on the runs. He had the ability to switch gears. When the conditions were bowler friendly, he would dig deep with his technique. The moment the conditions got batsmen friendly, he would turn it on. Hence he had those abilities to get those double hundreds. The moment he was batting with the tail, he might have been batting on 120 by then with three wickets in hand. Suddenly you had him batting on 200 because he knew who to target. He was a master of managing his own game and a truly great player,” added Shastri.

India’s current No.3 in the Test batting line-up Rohit Sharma also wished his Sri Lankan counterpart “all the very best” for his retirement.

“He has been a stalwart of the game and played this game in true spirit. I was fortunate enough to watch him play closely many a times in my career. I would just like to wish him all the very best,” said Rohit. 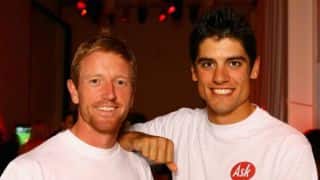