Indian all rounder Ravindra Jadeja loves to stay in the news; be it for his Instagram pictures with his horses or something else. But this time around, it’s not him, but his sister who made it to the news.

Jadeja’s sister Naina has filed a complaint of cheating against an Ahmedabad-based event management company named Absolute Events. The company in question was initially hired to plan Jadeja’s wedding but later fired over poor service. According to Naina, the event management company is yet to return her advance payment of INR 6 lakhs. She filed the complaint in Rajkot Taluka police which has been lodged and initiated the case. ALSO READ: Selfie with Gir Lions costs Ravindra Jadeja Rs 20,000; cricketer let-off after paying penalty

As reported by Mumbai Mirror, a close source to the family said, “As per the complainant, Absolute Events was hired for Rs 11 lakh to plan Jadeja’s wedding at Jaddu’s Food Field in Rajkot where all the functions were organised. The company was reportedly paid Rs 6 lakh as an advance amount. However, during the pre-wedding ceremonies, the family felt the event management company was not delivering as per their requirements and relieved them of the job.”

Naina also said that she was threatened by the owner Kaival Patel, when she contacted the company for the refund and added, “We had to switch to the services of a local event management company at the last minute. After the wedding, I contacted Absolute Events to discuss the return of the advance payment of Rs 6 lakh but they threatened me. In fact, Kaival Patel switched off his mobile phone.” ALSO READ: Ravindra Jadeja having a ball in the Caribbean

Since the owner was not available for any comment on this matter, the Rajkot Rural Police sub-inspector — KJ Chauhan quipped, “We have admitted a case of cheating against the company and received bank transaction details from the complainant. The team will visit Ahmedabad for investigation.”

It is notable here that Naina, who worked as a nurse during Jadeja’s struggling days in cricket after the death of his mother in order to support him, has been an important part of the cricketer’s life. Jadeja is currently on West Indies’ tour to play the Test series and is expected to look into this matter after he is back. 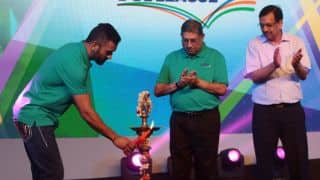 Team India in Olympics: who would play what?