Richie Benaud, former Australian captain and iconic cricketer commentator, died in Sydney. He was 84. Benaud was fighting a protracted battle with skin cancer and had also the after-effects of a serious car accident near his home in late 2013.

Richie Benaud, former Australian captain and iconic cricketer commentator, died in Sydney. He was 84. Benaud was fighting a protracted battle with skin cancer and had also the after-effects of a serious car accident near his home in late 2013.

Benaud was arguably the most important of the cricketing voices in modern cricket. Benaud, who was skipper of the Australian team in 28 of his 63 Tests, turned into a commentator after his playing day and became the most respected of the men behind the mike in cricket. Australia did not lose a single series under his leadership until his retirement in 1964. Benaud’s influential captaincy helped Australia restore the top spot in world cricket in the late 1950s and early 1960s. Benaud was the first cricketer to complete the double of 2,000 runs and 200 wickets in Test cricket. He bowled leg-spin and was an aggressive batsman in the lower order.

Benaud became the iconic voice of the Channel Nine team from the first summer of Kerry Packer’s World Series Cricket in 1977–78. He retired from international commentary after the 2005 Ashes series but remained a key figure in Channel Nine’s cricket coverage until the 2013 car accident sidelined him. In the dreaded accident, he crushed two vertebrae when his Sunbeam vintage sports car hit a brick wall near his home in Sydney.

Besides being a commentator, Benaud also wrote for newspapers and authored several books.

The social media was traumatized with this news. The shocking news has seen Twitter getting flooded with tweets full of grief. Here are some of the tweets:

Sad news about the passing of Richie Benaud. Legend on and off the park – cricket commentary has and will never be the same. #restinpeace

A truely great person, you will always be remembered for what you gave to this world. R.I.P Richie https://t.co/H820wsRS9x

A sad day. The voice of cricket, a legend of the game and a great person. Aussie cricket family have… https://t.co/ioRrungKhZ

Another sad day for cricket! We have lost another great cricketing brother. Watching and listening will never be the same. RIP Richie Benaud

What a man. Extremely sad day. You… https://t.co/Ea0uuS6UMZ

A sad day to hear about the loss of Richie Benaud #RIP https://t.co/B6oHa9QP7w

A very sad day for Cricket. Rest in Peace Richie Benaud, you will be missed by all who saw you play & heard you talk: http://t.co/dM42tjlGwO

RIP Richie Benaud !!! Sad to hear the news … What a charming voice and personality !!!

Our thoughts are with the Benaud family at this time, RIP one of the games all time greats! He will be missed by the whole cricketing world.

Dear Richie, I’ve known you & Daphne for close to 30 years & to everyone you were a legend on all… https://t.co/B2OSiW5Jon

Sad to wake up and hear of the loss of Richie Benaud. True gentleman and The Voice of cricket. Will always be remembered RIP Richie #190

#RIPRichieBenaud The Voice of Cricket and a truly great man. Thank you for everything you gave us, You will be missed by so many

The World of Cricket mourns a cricketing icon as Richie Benaud passes away at the age of 84 pic.twitter.com/DW0UUBJGs8

Times change. Benaud’s broadcasting was evocative of a gentle breeze in the country. Our world is more like a relentless gale.

People will continue watching cricket on TV if suddenly there was no audio. Benaud never lost sight of this fact.

Your name and voice will live on. Thoughts go out to your family. #RIPRichie

#richiebenaud first season of commentary was with the BBC in England in 1963, where he worked as a summariser for the Eng-WI Test series!

Cricket has lost its most famous voice today. RIP #richiebenaud The man who changed the voice of world cricket!

Had the pleasure of working with Richie Benaud. He was a super star amongst commentators. #RIPRichie

RIP Richie Benaud. World cricket will miss you and your voice.

#RIPRichie Wonderful personality who was always warm and encouraging. Had great insights on the game (1/3)

So sad to hear about the passing of Richie Benaud. The great voice of cricket is no more. He defined an era with conviction and sincerity

RIP Richie Benaud.His values cut across all generations & the best example in cricket to everyone associated with it. Always had a kind 1/2

#RIP Richie your voice will live on in our hearts. Condolences goes out to his family and friends. pic.twitter.com/HtnuD4wyKs

There is a Vale book in the Museum foyer for anyone wanting to pay tribute to our patron Richie Benaud pic.twitter.com/LzxoMs73Xf

A true icon and legend of the game. R.I.P Richie Benaud

The voice of cricket #RichieBenaud has passed away at the age of 84. #RIPRichie and thank you for all the memories. pic.twitter.com/9XROFgDxcv

Rest in peace Richie Benaud. Ur voice vl live on in our hearts. Condolences goes out 2 his family and frnds !!!

RIP Richie Benaud.. Thank you for the refreshing change you brought to the commentary box!

RIP Richie Benaud. In my childhood, Channel 9 showed me how wonderful cricket can look, and you showed me how great it can sound.

RIP Richie Benaud. Cricket summers will never sound the same without you behind the microphone #RIPRichie

I had the privilege of working with Richie for the BBC. Will never forget how kind he was to me. “G’Day Al!” to start every day! #TrueGreat

Cricket has just lost one of the legends,cricket on TV won’t sound the same http://t.co/hRkHBayiJQ Richie Benaud

There hasn’t been a commentator who watched and heard Richie Benaud and wished he could be as good. It is a very sad day for our game.

Richie was mentor for all. He defined cricket commentary. Commanded respect. Embellished the TV picture with wordsmanship. #RIPRichieBenaud

Benaud was always precise, relevant and succinct. He played the pause outstandingly.

In a broadcasting world full of noise, Benaud’s meaningful silences will be remembered the most.He spoke when there was something to be said

As a player, captain and broadcaster, #RichieBenaud cared for our game. He gave it a lot and leaves behind an astonishing legacy

A sad day for our game, we have lost a cricketing icon & true gentleman. Thank you for inspiring us all. #RIP #RichieBenaud

#richiebenaud was a sickly child at birth. The doctor had said “I let that little fellow go home to die. He must have wanted to live”

The world of cricket has not just lost a voice but a true legend in every sense…RIP Richie Benaud, you will be missed. #RIPRichie

Thank you Richie Benaud for making the game as lovable as it could ever be! You will be missed. He indeed was #AlwaysARoyal #RIPRichie

Sad to hear the passing of the voice of cricket, great player and a true gentleman. R.I.P Richie Benaud. 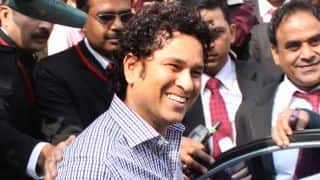 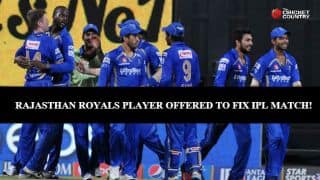