Karmakar, who is appearing in her first Olympics, finished eighth in the qualifying round and became first Indian gymnast to make it to the individual vault finals.

It is Olympics time and the sportspersons from different fields are admiring other athletes on their achievements. Legendary batsman Rahul Dravid recently took to his official Facebook account and posted a congratulatory message to Dipa Karmakar, Indian athlete who made waves for becoming first Indian gymnast to make it to the individual vault finals. ALSO READ: Rio Olympics Day 2 roundup: Cricketers wish Michael Phelps, Dipa Karmakar on their success.

Karmakar, who is appearing in her first Olympics, finished eighth in the qualifying round and thus made it to the finals. The athlete from Tripura also became India’s first woman to qualify for the Olympics after she secured 14.850 points in two attempts. Dravid, who is following the Indian contingent’s performance at the sporting spectacle, chose to praise Karmakar’s effort through social media. He wrote:

Dravid is a part of the three-men advisory board at GoSports Foundation along side the likes of Olympic gold medalist Abhinav Bindra and All England Badminton Championship winner Pullela Gopichand. Karmakar is a product of foundation’s Athlete Mentorship Programme, which is conducted by Dravid.  The foundation works with the mission of empowering India’s Future Olympians.

It was very kind of Dravid, who is currently the head coach of India’s junior cricket teams (India Under-19 and India ‘A’). He also posted few pictures of Karmakar, where she can be seen with her coach Bishweshwar Nandi, her close relatives before her departure for Rio and with her parents. After this historic achievement, not only Dravid, but entire India will have their eyes set on Karmakar. All shall be rooting for her, hoping she earns laurels for herself and her country in the finals and returns with a medal.

Did England bowlers get involved in ball-tampering during third Test against Pakistan? 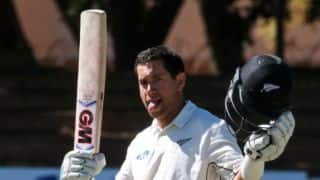